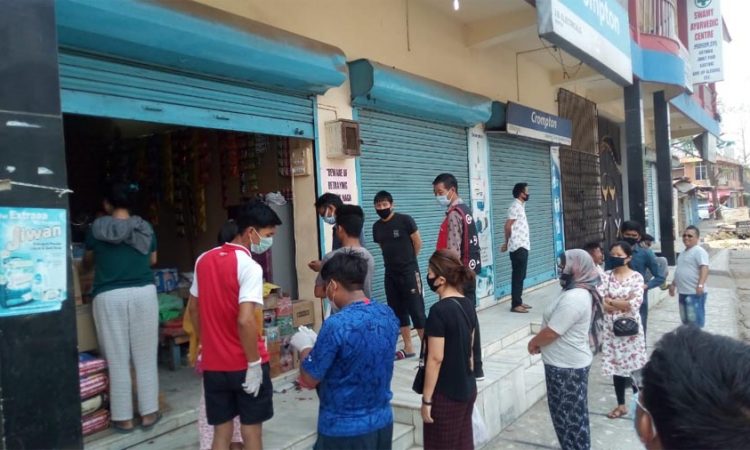 Dimapur, April 6: As the Dimapur District Administration and Commissionerate of Police relaxed the prohibitory orders in Dimapur from today after 5 days of “total lockdown”, people came out in large numbers to buy essential commodities and withdraw money from Banks and ATMs.
Long queues were seen at grocery shops in various parts of Dimapur town while the scene was similar at the ATM booths were people thronged to withdraw money.
Dimapur police had imposed tight vigil in and around town and were strict with all vehicles coming out in the town. While “no-entry” zones were clearly defined by erecting barricades to prevent vehicles from entering certain areas, the police personnel on duty also stopped vehicles at various points to enquire whether people were venturing out for buying essential commodities or for other reasons.
While people were happy to see grocery shops open in many area, a large section of people were disappointed as vegetable shops were not available anywhere in the town.

The Deputy Commissioner had ordered that vegetable shops would be open in respective colonies/villages, and New Market will be completely closed. But no vegetable vendors were seen in any colony today. Even usual vegetable markets at Nuton Bosti, Firing Junction and other areas were closed.
The only area where vegetable and fruit shops were open was Old Daily Market where people from all localities gathered and in no time, the stocks in the market were sold off.
According to sources, though the DC Dimapur has asked not to open the shops, the GB of the area had requested the vegetable vendors to open so that the people from the area are not deprived of their needs.
In the morning, the vegetable market at Railway Siding was closed down within hours of opening after large number of people gathered there and did not maintain social distancing.
Today, Fair Price Shops were also open in various places from where people collected rice.

DC, CP appeal to public
Meanwhile, Deputy Commissioner Dimapur Anoop Kinchi IAS has appealed to the public to stay at home and not to come out in the street un- necessarily as the nation lockdown was still enforced.
In case of emergency only, public are advised to avail the essential commodities from the colony markets during the specified timing from 9 a.m. to 2 p.m.
He also appealed to the public to maintain strict social distance reminding them that it pertains to health issue.
Commissioner of Police Dimapur, Rothihu Tetseo also appealed to the public not to come out in the main road/ national highway reminding that Section 144 Cr PC was still enforced in the main town and Highway stretch except those under exemption list.
Further, the Commissioner also requested the vehicle permit holders not to misuse the passes issued, reminding them that relaxation was given by the authority only for official purpose. Other vehicles without permits, moving out in the main town will be seized, he cautioned.
(Page News Service)