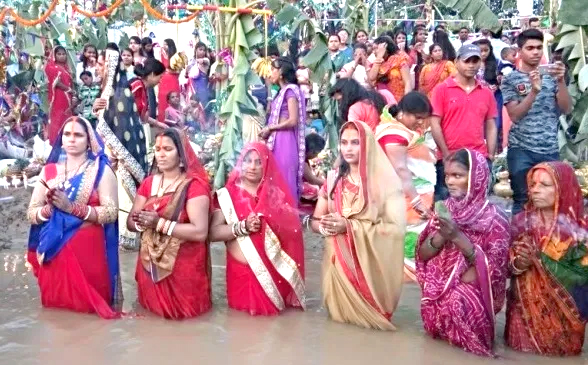 Kolkata, November 21: Beneath an overcast sky, devotees paid obeisance to the Sun god on early Saturday morning at large water containers at home, nearby ponds, rivers and other waterbodies, marking the culmination of the Chhat puja.
As on Friday afternoon, they also performed the puja rituals at artificial pools prepared by civic authorities but did not play music, unlike the previous years, officials said.
West Bengal Chief Minister Mamata Banerjee had appealed to people to offer prayers at home or visit neighbourhood ponds to hold the puja following health protocols related to the COVID-19 pandemic.
In Kolkata, the administration did not allow the puja in two lakes – Rabindra Sarobar and Subhas Sarobar following court orders.
The Supreme Court had on Thursday ruled that Chhath puja will not be allowed at the Rabindra Sarobar Lake, while the Calcutta High Court banned celebrations at Subhas Sarobar.
The National Green Tribunal had passed an order in 2018, banning Chhath puja at Rabindra Sarobar. However, hundreds of devotees flouted the ban and broke open the gates of the lake in 2019 to perform the puja.
An official of Kolkata Metropolitan Development Authority — the custodian of the two lakes — said that five gates of Rabindra Sarobar and several entry points of Subhas Sarobar remained locked since Thursday midnight, with personnel of the Kolkata Police guarding the premises.
The gates were locked till 3 30 pm Saturday, the official said.
The chief minister had also urged everyone to cooperate with the administration and honour the court orders. (PTI)