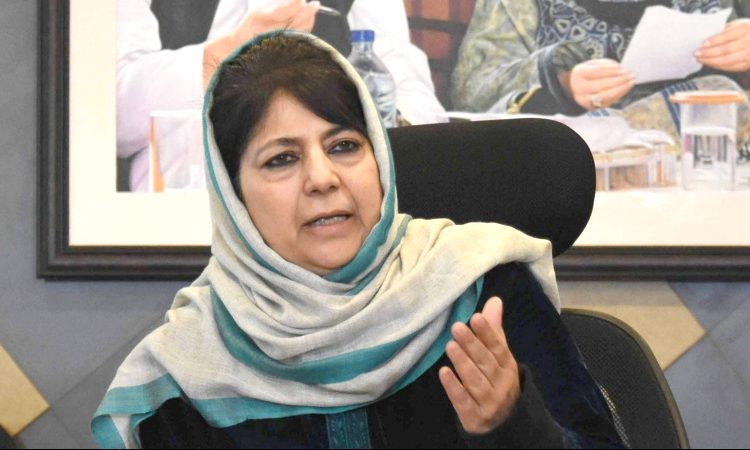 Jammu, November 9: PDP president Mehbooba Mufti on Monday asserted that the dialogue with Pakistan and the stakeholders within J&K and opening of cross-border roads to bring the divided parts together can bring peace and everlasting solution to the problem.
Mehbooba Mufti made the assertion while advising the BJP to take a leaf out of former Prime Minister A B VAjpayee’s book.
The former chief minister warned that militancy is on the rise in the Valley with more youths preferring militancy over going to jail after no middle path was left and voices of dissent silenced through the muzzle of power .
Attempts are being made to vitiate the atmosphere by politics of hatred and division. The people like us are facing problems to live in Kashmir due to an increase in militancy under their (BJP) rule.
They were saying militancy has finished but the reality is that at least 10 to 15 youth are joining militancy from each village, Mehbooba told reporters here at the end of her five-day visit to Jammu.
It was her first visit to Jammu after release from 14 months of detention under the Pubic Safety Act (PSA) following the abrogation of the special status of Jammu and Kashmir last year.
She said the militancy is on the rise because you (BJP) have silenced all the voices and not left the middle path for the people. The youth is thinking of two options — whether to go to jail or pick up the gun — and he chooses later to get killed rather than going to the jail.
Mehbooba said the situation on the borders is of concern to the people as local residents are living under the constant threat to their lives due to the continued cross-border shelling.
Asked how it is possible when there is no let-up in Pakistani shelling and mounting civilian casualties, she said, We have to pick up a leaf from former Prime Minister A B Vajpayee’s book.
Despite the Kargil war and Parliament attack, he entered into a friendship with Pakistan as a result of which the militancy had come down and the border firing also had stopped, she said.
We have to take a leaf out of that book and start a dialogue with them (Pakistan) and with the stakeholders in J&K. When we can hold eight rounds of talks with China which martyred our 20 soldiers and we did not even raise our finger, she asserted.
We are talking to them to seek one inch of our land, though they have occupied 100 square km of our land. Why this double standard? They should remember Vajpayee who is also their mentor and act upon his policy book, Mehbooba said.
She said both sides of Jammu and Kashmir are ours. We have to open the roads to bring the two parts of J&K together and look for an everlasting solution to the J&K problem so that peace returns to the region and China, which is showing aggression, stops.
Mehbooba said she wanted J&K to become a bridge of peace and friendship between India and its neighbours.
The border residents are facing problems every day due to cross-border firing and are unable to work in their land.
The PDP leader said her father Mufti Mohammad Sayeed had a vision of opening cross-border roads between the two parts of J&K like Suchet Garh-Sialkot, Srinagar-Kargil-Skardu, Nowshera-Mirpur and Kotli and the solution to the problem lies in the dialogue. (PTI)