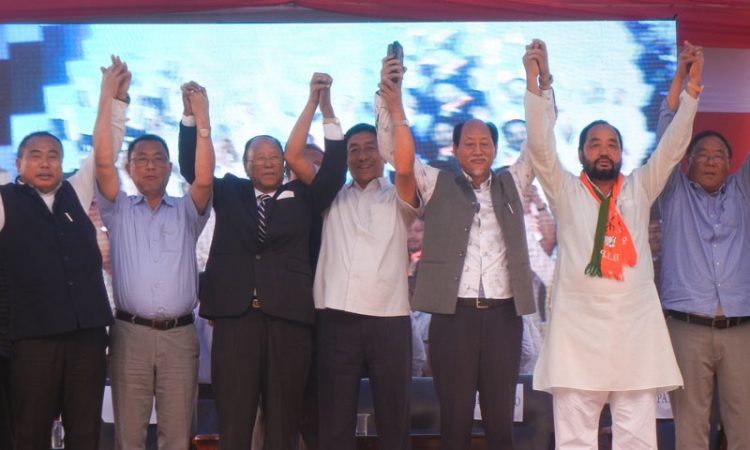 NDA Govt will come back at Centre: Rio

Dimapur, March 19: People’s Democratic Alliance (PDA) today launched its campaign for the 2019 Parliamentary Election from Dimapur, which saw all the alliance partners supporting the consensus candidate, Tokheho Yepthomi of the Nationalist Democratic Progressive Party (NDPP).
The PDA consists of NDPP, BJP, NPP, JD (U) and Independents.
Speaking on the occasion, Chief Minister Neiphiu Rio said that the PDA alliance has smoothly functioned and completed one year in the state. He thanked all the alliance partners for standing together in the progress of the state.
He said Dimapur is the most important district, which has highest number of voters, and therefore they chose to launch their campaign from here.
Talking about one year of PDA Government in the state, Rio stated that due to rains, the government could not do much to the expectation but the work is going on. He said priority has been given to Dimapur and Kohima, where road construction is going on, which includes national highways, town roads, district roads etc.
He also disclosed that last year many state departments have won national awards for their performance and added that Nagaland got the best award for law and order.
He said they could achieve all these as they are able to provide a stable government and have a peaceful atmosphere in the state.
Stating that NDA government will come back at the Centre, the Chief Minister said aftermath of Pulwama attack, the Centre decided to conduct air strike on terrorist camps in Pakistan, and then due to Prime Minister Narendra Modi’s strong stand, the Government was able to bring back one IAF pilot unharmed. Rio said that this has strengthened the image of Prime Minister Modi.
He also said that under the leadership of Narendra Modi, the NDA has brought a system in the country and has been able to curb corruption. He also said that settlement of Naga political problem will come only when there is a strong leader.
On the Citizenship Amendment Bill 2016, Rio said PDA government is very clear that Article 371 A can protect the Nagas.
Taking on the opposition NPF, the chief minister said that NPF has become visionless party where its leadership is in confusion. Stating that they have 26 MLAs at present, but they are not putting up any candidate for the Lok Sabha elections. They (NPF) don’t have election in mind, he added.
He appealed to the general public to make Tokheho victorious and send him to Delhi. He reiterated that Modi will come again and bring more changes, and even a solution to the Naga political problem will be arrived at.
Consensus candidate of the PDA, Tokheho Yepthomi, in his address stated that Naga issue is on top priority for him. He said it has been 22 years now that the peace talks are going on. During UPA tenure from 2004 to 2014, talks were held but never moved forward, he said adding, after the NDA came to power, under the leadership of Narendra Modi, the Framework Agreement was signed on August 3, 2015.
He said talks are now held under the PMO led by interlocutor, R N Ravi. He also lamented that earlier there was no record of Naga issue in the Parliament, and said that to bring solution, the matter has to come to Parliament.
Tokheho further said that the NDA formed the Parliamentary Committee, which submitted its report in the Parliament and said Naga talks are in advanced stage and should be settled at the earliest.
On the controversy on the CAB, Tokheho explained why he did not vote for the Bill in the Parliament.
NDPP President and Chairman, PDA, Chingwang Konyak said that NDPP has put up a consensus candidate for both Lok Sabha and bye-election to 26-Aonglenden A/C.
He said the people of the state has given mandate to Tokheho in the last parliamentary bye-election and hoped that this time too, they would make him victorious.
Stating that PDA has given commitment for a stable government, Konyak said in the last one year, the Government has given stability and strong leadership. He also said for peace and prosperity in Nagaland, Nagas need strong leadership.
Stating that Nagaland sends only one member to the Lok Sabha, Konyak said it would be better to send a candidate from the ruling party. He appealed to the general public to vote for Tokheho.
Agriculture Minister and JD(U) President, G Kaito Aye said that they stand by the commitment for the Naga political issue and opposition to the Citizenship Amendment Bill.
He said public and government should travel together to fulfill the promises made by the government to usher development in the state.
He also reiterated his commitment to support the consensus candidate in the forthcoming election.
Deputy Chief Minister, Y Patton said in the last election, people said BJP is anti-Christian, but its highest candidates won the Assembly election. He said the BJP has a pre-poll alliance with the NDPP and they are together come what may.
He also asked in which Northeastern state there is Congress at present, adding in Nagaland there is not a single Congress MLA. “We are expecting 20 out of 25 MPs in the Northeast from the NDA,” he asserted.
Patton, who is also the BJP LP leader, said that the party has already given assured that Nagaland and Northeast would not be affected by the CAB. “We are here to protect the citizens of Nagaland,” he said.
Advisor, Industries & Commerce, Imnatiba also spoke on the occasion. Earlier, the welcome address was delivered by Minister, Jacob Zhimoni while the vote of thanks was delivered by Advisor, Tovihoto Ayemi. (Page News Service)