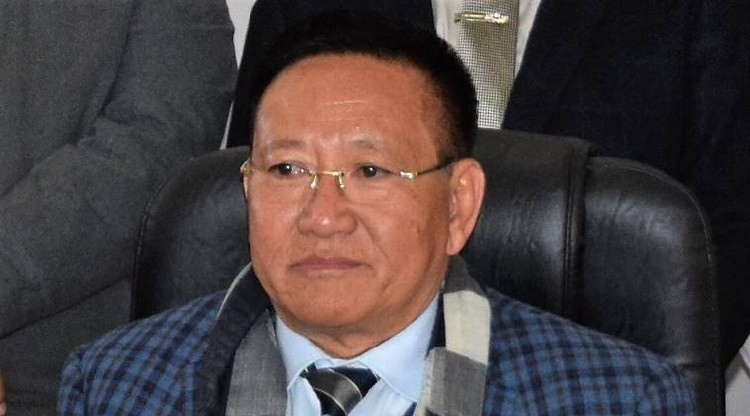 Kohima, January 31: Leader of Opposition party in Nagaland, T R Zeliang on Thursday said that the NDPP-led PDA government has failed to bring in any new projects but has only being implementing the projects which were sanctioned during NPF-led DAN-III government.
Addressing the NPF CEC meeting here, Zeliang said “the NDPP led PDA government has not been able to bring any new projects, especially road sector but only harping on implementation of the project approved and sanctioned during NPF led DAN-III government”.
In the road sector, he said apart from other, the two roads which were approved in principle during 2004-05 under SARDP-NE (Phase-A) – Dimapur-Kohima 4 lane road and Peren-Maram 2 lane road, both the roads were approved in the same year.
He pointed that Peren-Maram road went ahead floating tender and the road was completed in 2015-16, however, Dimapur-Kohima could not take off due to dispute between State and Ministry of Road Transport and Highway (MoRTH) on mode of implementation.
He said that the then Chief Minister Neiphiu led State government wanted local tendering system whereas MoRTH wanted to implement through EPC mode as per the laid down norm of National Highway.
Nonetheless, Zeliang claimed that as he took over the Chief Minister of the State, NPD led DAN-III government outrightly agreed for EPC mode and the matter was reprocessed and was approved during 2015-16.
He said that Union Minister Nitin Gadkari laid the foundation for the four-lane road work on November 3, 2016 during which the State government submitted memorandum for upgradation of Dimapur and Kohima City road.
He said the Union Minister in response to the memorandum approved and sanctioned six major road projects within one year. The roads include: Amar Mill-Zion Hospital junction (two-lane), Zion junction Purana Bazar- Chumukedima Patkai Bridge (4 lane), Dimapur City bye-pass Road (Khatkati-Patkai), Dimapur-Kohima bye-pass Road (Niuland-Zhadima), Kohima City Road (New Check Gate-Lerie) and Kohima City bye-pass Road – Jotsoma junction to Kisama via New Secretariat-BSF Camp.
All the road projects submitted to Gadkari during his visit to Dimapur, Jalukie and Kohima were approved within 6 months, Zeliang said.
Zeliang, however said, Rio has cunningly declared that PDA government will provide good roads starting from Kohima and Dimapur despite the failure to bring a single road project so far in the State. He therefore said “there are people who know the ground reality but the innocent public will surely think that work are now in progress as committed by Neiphiu Rio despite the fact that he has failed to bring even a single project till today,” Zeliang added.
Under Rural Development, he disclosed that the Centre had sanctioned Rs 298 crores for various projects in 2017 but due to elections the then DAN-III government was unable to execute the same. However, Zeliang alleged that the PDA government even after one year of running the government has failed to utilize the fund because it has already diverted the amount not to speak of bringing additional funds.
On CAB 2016, Zeliang said Rio led PDA thinks Nagas are fool because the PDA cabinet last year has already conveyed to the Prime Minister and Union Home Minister that they would will not oppose the Bill in Nagaland while its MP Tokheho Yepthomi has extended support to its passage in Lok Sabha on January 8 last.
Highlighting the various initiatives on Indo-Naga issue under DAN-III,. Zeliang said that the slogan of PDA was “election for solution” whereas the slogan of NPF was “solution before election.”
“After they coined the slogan how many election are we facing? What has PDA done in almost one year?,” Zeliang raised question during the CEC meeting of NPF here today.
He said such was the reason the 26 MLAs of NPF refused to go to Delhi before “we know the latest step taken by the present government & NNPGs/NSCN- IM.”
Zeliang recalled that on December 7, 2017, a consultative meeting of all the tribal Hohos and ex-parliamentarians was held at Jotsoma which led to adoption of a resolution which was passed in the Nagaland Legislative Assembly on December 17, 2017.

Also the NPF party was one of the signatories to the Joint Declaration which was organized by the Core Committee of Nagaland Tribal Hohos and Civil Society Organization (CCNTHCO) on January 29, 2018, to abstain from filling nomination in the 2018 state assembly election, demanding a solution before election.
NPF legislature party leader said that even the President of India Ram Nath Kovind during his visit to Nagaland in the month of December during Hornbill festival, has said that ‘Final agreement to the Naga political issue’ would come soon. Even the Governor of Nagaland has said on 6th March 2018 that the decades-old vexed Naga political issue would be resolved within 6 months. There was even the slogan of ‘Election for solution’ before the 2018 state assembly elections.
He said that NPF party approach towards Naga political issue was with positivity.
He said the NLA has passed resolutions on Naga integration on seven occasions in the past.
“Even if we arrive at a settlement where integration of Naga areas is not included, we should insist that appropriate words and clause is inserted in the final agreement so that the door is not closed for our legitimate right to be integrated under one administrative umbrella in the future,” Zeliang said.
Touching on Citizenship Amendment Bill 2016, Zeliang said that Article 371 (A) is not connected to the Citizenship Amendment Bill, 2016.
There is no mention of Citizenship in the said Article and after the Citizenship Amendment Bill is passed in the Rajya Sabha and becomes and Act, the hope of using Article 371 (A) as ammunition to oppose the Act will be a long, expensive and futile exercise, he said.
How can one be so sure that Article 371 (A) will protect the citizens of Nagaland from influx of immigrants who will be granted Indian citizenship once the Citizenship Amendment Bill becomes an Act?, he asked.
He said cabinet decision was taken earlier in 5th June 2018 and 7th January 2019 in which the Citizenship Amendment Bill was not opposed by the PDA government “but today it has suddenly taken a U-Turn.”
He said that the record stands straight that the draft Bill of the Citizenship Amendment Bill was introduced in July 2016 when Neiphiu Rio was the lone MP representing Nagaland in the Lok Sabha and passed when Tokheho Yepthomi of the NDPP party represented the state.
He said today’s consultative meeting convened by PDA government at Dimapur was just an eye-wash.
“Such meeting is called information meet not consultation meet,” he said.
He said it is rather the NPF party that should call a consultative meeting along with MP of NPF (Rajya Sabha) “because we had decided to oppose the bill from day one and our MP will also go by the decision of the party if it comes up in the Rajya Sabha).
Today, we should entrust our MP RS to raise CAB issue and explain why Nagaland should be exempted from this contentious bill,’ he added.
MLAs Imkong L Imchen, Kuzholuzo Nienu, Thongwang Konyak and Vikheho Swu also exhorted the party leaders to remain strong and propagate the achievements of last NPF government while also highlighting the failures of present NDPP-led PDA government to the people of the State. (Page News Service)