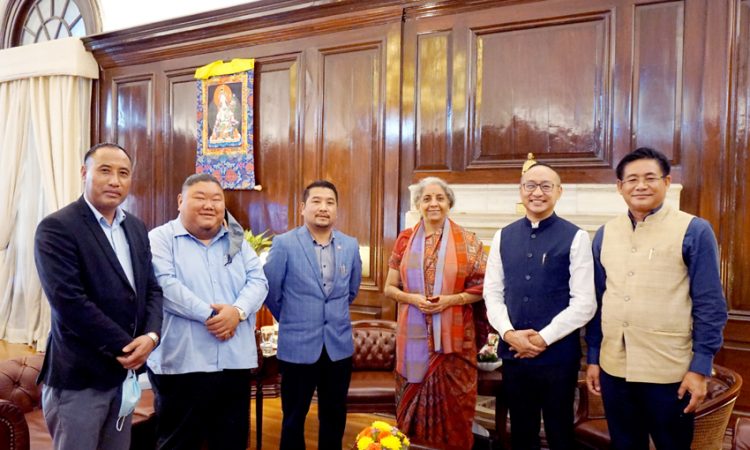 DIMAPUR, FEBRUARY 23: A delegation of PDA legislators from Nagaland met with Union Finance Minister Nirmala Sitharaman at North Block in New Delhi on Tuesday and sought a special allocation for “all round development of the State”.

A press release from PRO Nagaland House in New Delhi informed that the delegation included Advisor for IT, Science and Technology, and NRE Mmhonlumo Kikon, Minister for Higher Education and Tribal Affairs Temjen Imna Along, Minister for PWD (Housing and Mechanical) Tongpang Ozukum, Advisor for Horticulture, Border Affairs Mhathung Yanthan, and Advisor for TE and Election Medo Yokha.
Kikon requested Sitharaman for special allocation in the road sector, particularly for the development of the Trans Nagaland Highway which will connect all the foothills of Nagaland and form the backbone of the state in terms of district connectivity.
“During the discussion Imna Along, while stressing on the importance of the Trans Nagaland Highway, specifically appealed to the Union Finance Minister on the National Education Policy and the need for considering the special needs of the north-eastern States. On the issue of Farmer Production Organization for Nagaland raised by Mhathung, the FM assured to extend all possible assistance,” it stated.
Tongpang requested Sitharaman to consider the proposal of the State for development of an International Exhibition and Convention Centre in Dimapur district under Externally Aided Project (EAP) and highlighted the ongoing projects initiated by the Housing department under State Plan and negotiated loan which requires about Rs 400 crore for completion.
“The Union Finance Minister patiently listened to all those who spoke on behalf of the delegation, and assured them that, the central government will extend all the possible help for all round development for the State. The delegation also extended invitation to the FM during the forthcoming Hornbill festivals,” it added.
Page News Service