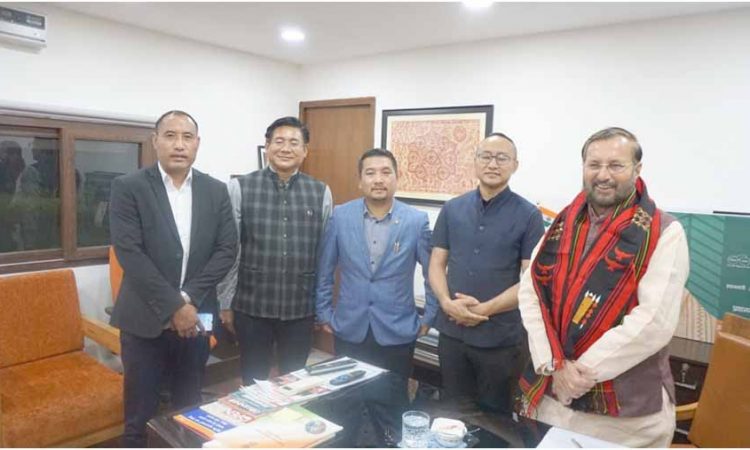 Dimapur, February 26: A PDA delegation on Friday called on the Union Minister for Environment and Forest at his official residence at New Delhi and proposed for Central assistance to create state of the art ecotourism infrastructure vis-à-vis Amur Falcon Roosting sites.

The Union Minister, while appreciating the proposal, raised the issue of delay in submission of Wetland Development Plan (National Plan for Conservation of aquatic ecosystems), NPCA, by the State.
In regard to man-elephant conflict, the delegation requested for provision of adequate compensation to affected persons.
The delegation conveyed the State Government’s appreciation to the Union Minister for his timely intervention during the recent fire at Dzukou. They also appealed for provision of resources to procure firefighting equipment and construction of permanent firelines to prevent future occurrences. An invitation was extended to the Union Minister to visit Dzukou valley in the near future.
The delegation requested the Union Minister for his intervention on the post-facto CRZ clearance of the Nagaland Guest House at Navi Mumbai, to which the Minister assured to clear the issue at the earliest.
The PDA delegation had earlier called on the Union Minister of State for Housing and Urban Affairs and Civil Aviation Hardeep Singh Puri on February 25. During the course of discussion, the delegation extended the State’s gratitude to the Minister for providing direct flight connectivity between Dimapur and Delhi and clearance for cargo facilities at Dimapur Airport.
The Union Minister also agreed to extend all possible assistance to the State in terms of development of infrastructure and to this he gave in principle approval for provision of “Demonstration Housing Project” in the State as requested by Tongpang Ozukum, Minister for Housing, informed a press release issued by PRO (IPR), Nagaland House, Kuolie Mere.
A team of officials from the Ministry will be shortly visiting the State to take stock of the ongoing infrastructure development and also visit the proposed site for the DHP.