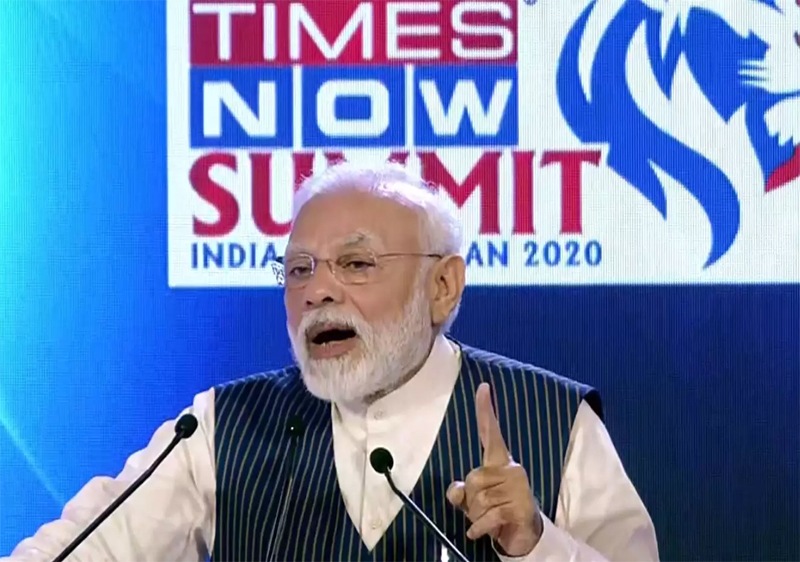 New Delhi, February 12: Prime Minister Narendra Modi on Wednesday urged citizens to pay their dues for the country’s development and underlined that his government was making the taxation system more citizen centric.
The Prime Minister pointed out that out of the three crore Indians who went abroad last year, only 1.5 crore paid income tax.
“More than three crore people went abroad for business or as tourists. Many people also bought cars. But the situation is such that out of a population of more than 130 crore, only 1.5 crore have paid income tax,” Modi said at the Times Now Summit.
He also said that it was unbelievable that only 2,200 people in the country had declared earnings of Rs one crore per annum.
The PM said the government is keen to ensure that tax payers are not burdened.
“Until now, process-centric tax system has been predominant in India. Now, it is being made public-centric. Income tax is necessary for development and tax payers should not be burdened,” Modi said at the Times Now Summit.
He acknowledged that there is concern that some people managed to evade taxes while the honest were penalised.
“When a number of people do not pay tax, find ways to evade it, the burden falls on those who honestly pay their dues,” he said.
In the Union Budget earlier this month, individual taxpayers were given major relief with Union finance minister Nirmala Sitharaman announcing sharp reduction in tax rates for those who do not avail of any exemptions. But income above 15 lakh per annum will continue to be taxed at 30%.
Modi went on to say that a taxpayers’ charter will end harassment.
“India is one of the few countries of the world, which will have a taxpayers’ charter that clearly defines the rights of tax payers. I want to assure that tax harassment will be a thing of the past in our country.”
He said that this was the first time any government had focused on smaller cities to boost economic development.
“For the first time, a government has focused on the economic growth of small…The new centers of economic activity in
India are our Tier-II and Tier-III cities….. “India will not waste time now, it will surge ahead with confidence,” he said.
And despite a massive economic slowdown dogging the country, the Prime Minister said the target of achieving a $5 trillion by 2025 is possible.
“The aim of India in the next 5 years is to become a $5 trillion dollar economy. The aim is not easy but not unachievable. India took 70 years to reach $3 trillion mark but no one asked any question about it. It’s better to set difficult goals and work hard to achieve them than to remain directionless,” Modi said. (Agencies)