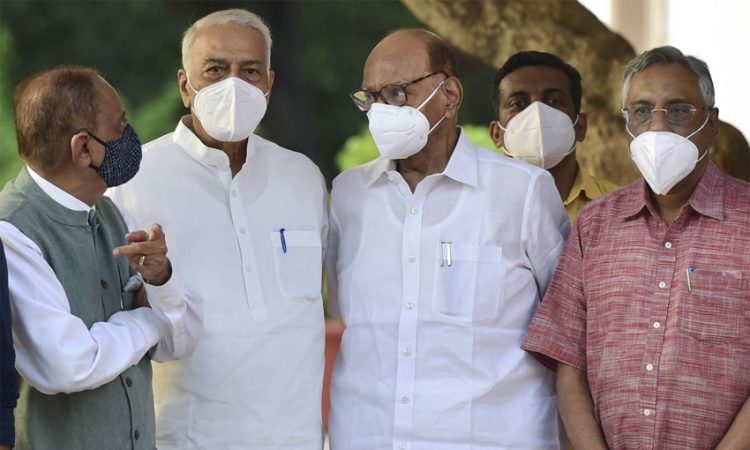 New Delhi, June 22: Leaders of several opposition parties including TMC, SP, AAP, RLD and the Left assembled at NCP chief Sharad Pawar’s residence here on Tuesday and discussed various issues facing the country, amid intense speculation about the possibility of a third front against the ruling BJP.

However, leaders who took part in the discussions asserted that it was a “non-political” meeting of like-minded individuals by Rashtriya Manch that was floated by former finance minister and TMC vice-president Yashwant Sinha along with others.
NCP leader Majid Menon said it was not a meeting for forming an anti-BJP front or a non-Congress front.
The meeting lasted more than two hours and was attended by Omar Abdullah from National Conference, Samajwadi Party’s (SP) Ghanshyam Tiwari, Rashtriya Lok Dal (RLD) president Jayant Chaudhary, Sushil Gupta from the Aam Aadmi Party (AAP), Binoy Viswam from the Communist Party of India (CPI), Nilotpal Basu from CPI(M) and Sinha among others.
Former Congress leader Sanjay Jha and former Janata Dal (United) leader Pavan Verma also participated.
Besides politicians, several eminent personalities such as Javed Akhtar, Ambassador KC Singh, Justice (retd.) AP Shah were also present at the meeting.
Addressing reporters after the meeting, Menon, who is one of the founders of the Manch, said it was a non-political meeting and was not called by Sharad Pawar.

“It was not an anti-BJP political front meeting called by Sharad Pawar. It was a meeting of Rashtriya Manch held at his residence. Like-minded individuals or people with the same ideology attended the meeting and there were several apolitical personalities present in the meeting,” Menon said.
He also dismissed reports stating that an attempt is being made to form a non-Congress front.
There is no such attempt, he said, adding five Congress MPs including Kapil Sibal, Vivek Tankha, Manish Tewari and Abhishek Manu Singhvi were invited for the meeting but due to some pressing issues, they could not attend.
Similar sentiments were expressed by CPI(M) leader Basu after the meeting saying that it was an interaction among like-minded people and should not be seen as a political meeting.
He said several issues such as “COVID management, ‘attack’ on institutions and unemployment, and rising inflation among others were discussed.
Earlier in the day, a senior Nationalist Congress Party (NCP) leader, on the condition of anonymity, said though Pawar is hosting the meeting, it has been organised by former BJP leader Yashwant Sinha who is the convenor of the Rashtra Manch.
Sinha formed the Rashtra Manch, a political action group, in 2018 that targeted the BJP-led government’s policies.
Octogenarian Pawar is one of the senior-most politicians in the country and enjoys a good rapport with political parties across the board.

It was due to his efforts that ideologically opposite Shiv Sena and Congress joined hands along with the NCP to form government in Maharashtra.
The meeting, which was attended by leaders from several non-Congress opposition parties and eminent personalities who have been critical of the Modi government, further fuelled speculation of a third front to take on the BJP-led NDA juggernaut in the elections. (PTI)
On Monday, poll strategist Prashant Kishor had met Pawar at his residence and the NCP had said that the Maratha strongman is trying to unite the opposition. (PTI)