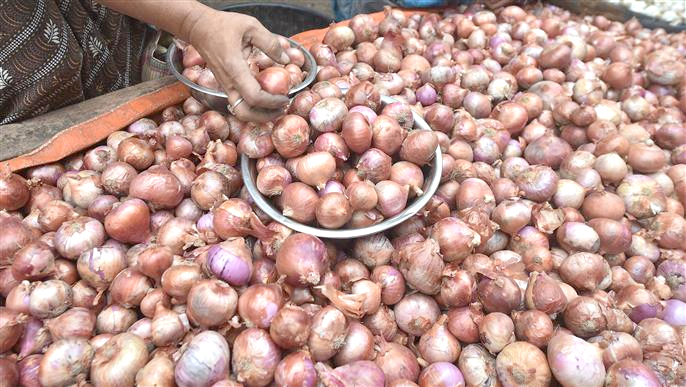 Mumbai, October 28: NCP chief Sharad Pawar on Wednesday blamed the central government’s policies for the spiralling prices of onion and said he would speak to the Centre about the stock limit imposed on the commodity traders.
Traders kept off the onion auction in most of the Agriculture Produce Market Committees in Maharashtra’s Nashik district, including at Lasalgaon APMC, Asia’s biggest onion market, for the third consecutive day on Wednesday to protest against the Centre-imposed stock limit on the kitchen staple.
Maharashtra is one of the top producers of onion and Nashik is a major hub of the commodity.
Speaking to onion growers and traders in Nashik, Pawar said a comprehensive policy is needed regarding lifting of the export ban and stock limit of onion, and it should cover interests of all stakeholders.
“Discussions will be held soon with authorities concerned at the Centre regarding this. Though the farmers and traders are suffering due to these decisions, stopping auctions cannot be an option. Therefore, onion auctions at the APMCs should be started,” he said.
Onion is being sold at Rs 80 to Rs 100 per kg at retail markets in Mumbai and other places.
To contain onion prices, the Centre last week imposed stock holding limit on retail and wholesale traders till December 31 to improve the domestic availability of the key kitchen staple and provide relief to consumers.
Retailers can stock up onion up to 2 tonne, whereas wholesale traders are allowed to keep up to 25 tonne, it said.
To register their protest against the Centre’s move, traders kept off onion auctions for the last two days in all 15 Agriculture Produce Market Committees in Nashik, including at Lasalgaon APMC, Asia’s biggest onion market.
Appealing traders to reopen the markets for auction, Pawar said banning export and promoting import was contradictory and the stock limit condition should also be removed.
He said the Centre had excluded onion from the list of essential commodities and at the same time, there were raids against traders.
“I don’t think the instructions came from the state government,” the former Union agriculture minister said.
“The state government is not responsible for action against traders. The decision on import and export of onion takes place at the central government-level,” said Pawar, whose party is an alliance partner in the Uddhav Thackeray-led Maharashtra government.
Nashik has always been known for growing quality onion and the rise and fall in market prices affect onion the most, the NCP chief said.
He said Nashik is one of the major producers of onion in the country and as a result, the onion produced here is more in demand in the international markets.
“Therefore, Nashik suffers the most due to any wrong decision regarding onion. Along with the state government, the Centre should take some policy decisions to resolve the issue,” he said.
Pawar said he will hold discussions with the Union minister concerned over the issue and later, a meeting of representatives of traders and farmers will be arranged with the authorities. (PTI)