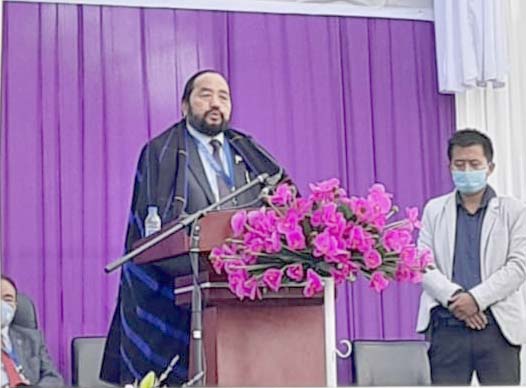 DIMAPUR, JANUARY 17: Deputy Chief Minister Y Patton has assured to sponsor two theologians from Old Changsu village till their graduation “should there be any willing candidates”.
A press release from the deputy chief minister’s media cell on Sunday informed that Patton made this assurance while attending the centennial jubilee of Old Changsu Baptist Church.
He also assured to sponsor “some genuine and committed aspirants” from the village who wants to undergo coaching classes for competitive exams.
Patton further encouraged the competitive exam aspirants by declaring incentives for those who cracks NPSC and UPSC exams, it stated.
The deputy chief minister, who also holds PWD (R&B) portfolio, assured a black-topped approach road from the entry to Witter Bible College campus at Vankhosung within two years.
Patton reiterated that jubilee is a time to repent, forgive and forget past rancour and exalt God for all His grace during the past years.
(Page New Service)