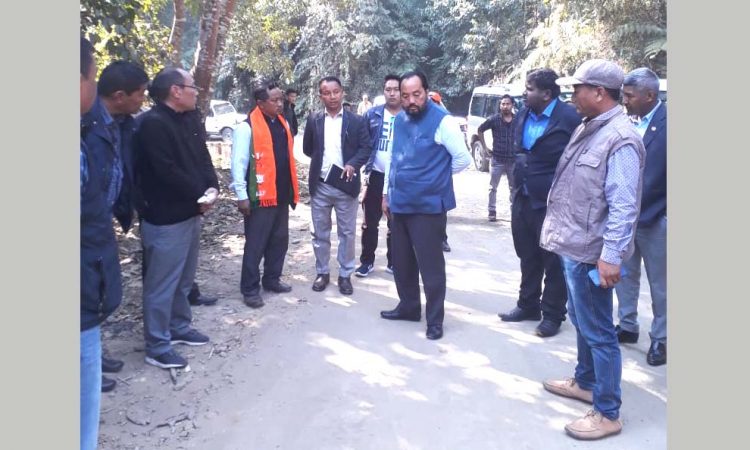 Dimapur, February 5: Deputy Chief Minister, Y Patton has expressed disappointment over the ongoing repairing and blacktopping works at Tapi area under Mon district and expressed “anguish” against the poor workmanship carried out by the concerned agency.
Patton, who is also holding the portfolio of National Highways, paid a surprised visit at the ongoing repair and construction work at NH-702 under Mon district.
The Deputy Chief Minister stated that poor workmanship towards the public sector cannot be compromised at any cost, and urged the concerned contractual agencies to take stock of the poor work and ensure quality and good road for the public.
Patton stated that contractors should maintain and follow the guidelines according to the government orders.
He also urged the concerned engineers and department officials to be watchful and closely monitor the whole process in order to deliver high-quality road to the people.
He further stated that the NH-702 is one of the major highways and economic lifeline particularly to the Eastern Nagas, adding his concern for the Eastern Nagas made him pay a surprised visit and conduct checking at the ongoing works.
While interacting with the Konyak Union, Konyak Students’ Union and Tapi Area Students’ Union today the deputy Chief Minister also called upon the general public to extend full support and cooperation for better development of the road and also to look after the quality of work.
He asked the public to report to the government if the concerned contractors are not following according to the government guidelines and specifications.
The Deputy CM was accompanied by Superintending Engineer-1 (NH) , Er. Yanbemo Humtsoe, Superintending Engineer-2 (NH), Er. Tia , the Executive Engineer (NH) Mon District, Z. Mero, (IPS) IGP. (Page News Service)