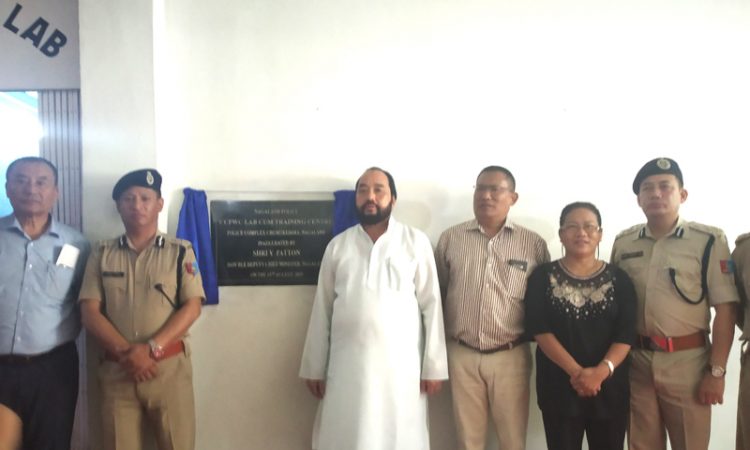 Dimapur, August 15: Deputy Chief Minister, Y Patton today expressed serious concern over the alleged land encroachment that is taking place in Chumukedima Police Complex and cautioned that serious action would be initiated against the defaulters.
“Land encroachment will not be tolerated at all,” he said and asked the officer incharge to submit the original documents and maps of the acquired land.
Speaking during the inauguration of Nagaland Police Cyber Crime Prevention Against Women & Children Lab (CCPWC) cum Training Centre at Police Training School complex, the Deputy Chief Minister disclosed that the issue of land encroachment was raised by former Governor of Odisha, Dr S C Jamir to him today.
He asked that officers to let him know how much land has been encroached upon by people.
Meanwhile, Patton said with the inauguration of CCPWC, Nagaland police has added another feather in its camp in the field of scientific aid to investigation.
He said with the rapid increase in the use of Information & Communication technology system, most of the crimes has the element of misuse by computers, smart phones, communication networks etc, which are misused by criminals in committing conventional crimes.
Stating that cyber crime has emerged as major challenge for the law enforcement agencies, the deputy chief minister hoped that the CCPWC would strive to ensure that cyber crime investigation would not only be confined to few specialist but to make it a must for police officers who are the first responders to victims of crimes.
He also said the cyber crime has posed as a great challenge to the traditional policing and called upon the police personnel to sharpen their skills to tackle the threats posed from the cyber world.
“We need to build a public trust in the Digital World and for that we need to have zero tolerance towards cyber crimes,” he said.
Stating that women and children are most vulnerable sections of the society, Patton hoped that the police personnel would be trained in specific topics and courses, about the modus operandi of the criminal relating to cyber crimes committed against women and children and also how the police can assist the victims for such crimes.
He also emphasized that the CCPWC impart training on all social media crimes, financial frauds, criminal intimidation through the use of cyber technologies, circulation of obscene materials, lottery scam etc.
This is the first Cyber Forensic Lab cum Training Centre, which has been set up under “Cyber Crime Prevention against Women and Children,” a Centrally Sponsored Scheme.
IGP (CID), Zekotso Mero, IPS said that the objective of this facility is two pronged-Forensic Analysis of Digital Devices and Capacity Building by training police officers to investigate cyber crime cases.
He also informed that training would commence from tomorrow and as per the schedule 50 police officers would be training by this year in two courses-3-day basis course on Cyber Crime and 5-day advanced course on Cyber Crime Investigation.
Short speech was delivered by ADGP(L&O) Renchamo P. Kikon,IPS. Project Report was given by Kedo Nagi, CEO, Ramietech Solutions, system integration. (Page News Service)