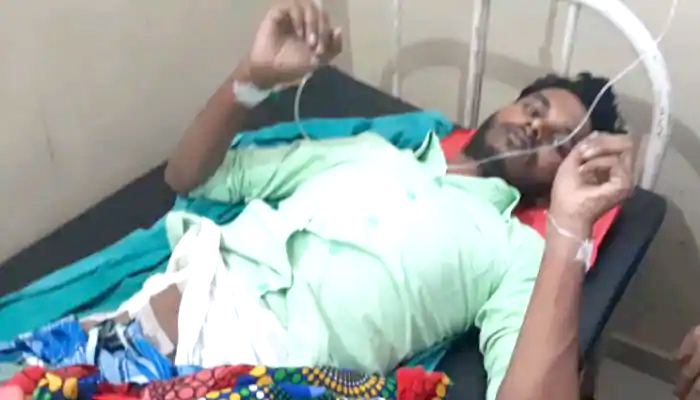 The patient whose kidney was removed: Zee News pic

Patna, November 18: In a bizarre incident in Patna, the capital city of Bihar, a doctor took out a kidney of a patient, who came to his private clinic for stone surgery. The 20-year-old man from Begusarai recently came for his surgery at the private clinic, near Road No-11, under the Kankarbagh police station area of Patna, but was shocked to know that his kidney was taken out.
The incident came to the fore when the patient started having abdominal pain. When his family reached the doctor to know the reason, the doctor initially tried to avoid the matter but when the family remained adamant he started apologizing and asked them to settle the issue.
As soon as the news spread in the nearby areas, a crowd thronged the place and there was an uproar. The family also informed the police in this regard. The police reached the spot and pacified the agitated people.
The doctor, however, stated that the patient had a stone on the right side as well and added that he had to take out the kidney due to excess blood flow during the operation. He further said that he also gave this information to the family members but the same was denied by the patient’s relatives. The family said that when the patient had no kidney problem, why was this organ removed from the patient’s body.
Meanwhile, reports have come that the family of the patient settled the matter with the doctor on a stamp paper of Rs 1000 and took a compensation of Rs 10 lakh.
The doctor also got the patient admitted to Paras Hospital for further treatment. The family did not register a case against the doctor and refused to talk about the matter when this Zee News reporter tried to take their version. (ZeeNews)