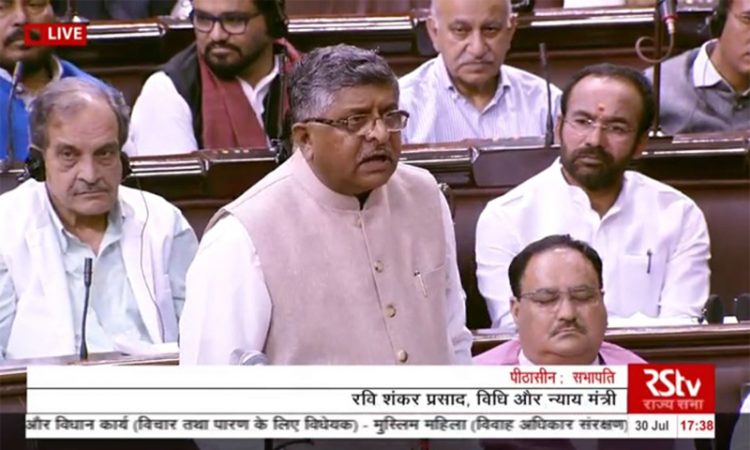 New Delhi, July 30: In a big victory, the Modi Government on Tuesday secured Rajya Sabha’s clearance for the landmark triple talaq bill helped by support from the BJD, walkout by BJP allies JD-U and AIADMK and some abstentions to get Parliament’s approval for the contentious legislation.
The passage of the Muslim Women (Protection of Rights on Marriage) Bill that makes instant triple talaq among Muslims a criminal offence with 99 votes in favour and 84 against was a major legislative success for the BJP-led NDA in the opposition-dominated Upper House where it lacks majority. The bill failed to pass the Rajya Sabha hurdle early this year during the first term of the Modi government though it was approved by the Lok Sabha.
The government had succeeded in getting the House approval last week for another contentious measure–the Right to Information(Amendment) Bill.
The ruling alliance was helped by the absence of some members of the opposition Congress, SP and BSP as well as six members of Telangana Rashtra Samithi (TRS) and two MPs of the YSR-Congress.
Lok Sabha had passed the Bill last week and once it gets Presidential assent the practice of Muslim men instantly divorcing their wives by uttering ‘talaq’ thrice will become a criminal offence, punishable by a jail term of up to three years.
The bill will replace an ordinance promulgated on February 21.
The Rajya Sabha also rejected an opposition sponsored motions to send the bill to a Select Committee of the House and for making triple talaq a civil offence with 100 votes against it as compared to 84 in favour.
Led by Prime Minister Narendra Modi, the BJP hailed the passage of the bill.
Modi said a historic wrong done to Muslim women has been corrected and an “archaic and medieval practice” confined to the dustbin of history while Home Minister and BJP chief Amit Shah asserted that the legislation will free Muslim women from the “curse of this regressive practice”.
India rejoices today, Modi said in tweets minutes after Rajya Sabha passed the bill
Modi said this is a victory of gender justice and will further equality in society, as he expressed his thanks to all parties and MPs who supported its passage.
These parties and MPs have risen to the occasion and this step of theirs will forever be remembered in India’s history, he said.
Law Minister Ravi Shankar Prasad, who piloted the bill, said it is a “historic day” for the country.
“Government of PM @narendramodi has fulfilled its commitment by giving justice to Muslim women…No more Talaq-Talaq-Talaq,” Prasad tweeted.
The Opposion Congress on its part said there was no need to criminalise the practice which had already been struck down by the Supreme Court, while senior party leader Raj Babbar termed the bill’s passage as a “historic mistake”.
While BJD’s seven members supported the legislation, JD- U’s 6 MPs and AIADMK 11 members walked out, lowering the majority mark which normally stands at 121. The ruling NDA has 107 members in the 242-member Rajya Sabha.
The same strategy had helped the government push through controversial amendments to the RTI Act despite lacking numbers in the Upper House.
The NDA was also strengthened by absentees in the opposition ranks. Oscar Fernandes and four other Congress MPs as also NCP leaders Sharad Pawar and Praful Patel were absent. Two Samajwadi Party MPs, Ram Jethmalani of the RJD, two Trinamool Congress MPs and one member of the Telugu Desam Party (TDP) were also not present.
Replying to a four-and-half-hour debate on the Bill, Ravi Shankar Prasad cited jail provisions in the legislations that ban dowry and multiple marriages by Hindu men to justify the three-year jail term for Muslim men practicing triple talaq.
The minister said he cannot leave in lurch women who have been divorced by triple talaq via WhatsApp or other such means.
“Should I leave them (Muslim women) crying and sobbing on the foothpaths,” Prasad, adding the government will not hesitate to stand by them and do justice to them.
On opposition charge of BJP being anti-Muslim, he said no religion centric issues were raised when reforms in Hindu Marriage Act were carried out in wholesale.
Jail term was prescribed when a Hindu man married another women. “At that time no one raised the question about how the family will be run,” he said.
The Law minister said BJP may be getting a little less votes from the Muslim community but it considers them very much a part of the country and works on the principle of ‘sabka saath, sabka vikas, sabka vishwas’.
Prasad said the bill should not be seen through a political prism as it is a matter of humanity, woman empowerment and gender equality.
Leader of the Opposition Ghulam Nabi Azad said the opposition has been forced to vote against the bill after the government did not accept their demand to send it to a select committee and make triple talaq a civil offence.
The opposition parties say in its current form, the proposed law could be misused to harass Muslims and wanted it to be reviewed by a parliamentary committee.
The triple talaq bill makes declaration of talaq-e-biddat or pronouncing talaq three times in spoken, written or through SMS or WhatsApp or any other electronic chat in one sitting illegal.
Criminalising the offence, it gives a police officer powers to arrest the offender without requiring a warrant.
To check misuse of cognisable nature of the offence, the triple talaq bill makes declaration of talaq-e-biddat only if the complaint is filed by the aggrieved woman or any of her relation by blood or marriage.
A magistrate can grant bail only hearing the aggrieved woman.
The aggrieved woman is entitled to demand a maintenance for her and her dependent children under the bill.(PTI)