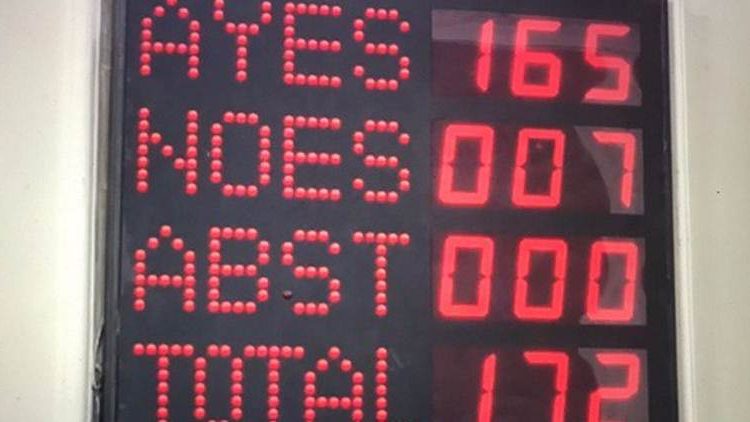 New Delhi, January 9: A bill to introduce 10% quota for poorer sections in general category has been cleared by parliament. The Rajya Sabha approved the bill on Wednesday after a marathon debate that saw most opposition parties demanding that the legislation be sent to a select committee. But when the government pushed for a vote, almost everyone voted for the bill.
Rajya Sabha Deputy Chairman Harivansh Narayan Singh said the constitution amendment bill had been supported by 165 of the 172 members present. Seven members voted against it. The Lok Sabha had cleared the bill yesterday.
The 10% quota covers nearly 190 million people from the general category and is seen as an effort by the BJP-led national coalition to reach out to upper caste groups and once-dominant agrarian communities such as the Patidars, Jats, Gujjars and Marathas who have been lobbying for reservation.
Social Justice Minister Thawar Chand Gehlot, who had spoken minutes earlier, said the constitution amendment bill was brought with clean intentions. On Congress leaders questioning how reservation on economic criteria could be introduced under the Constitution, Gehlot wondered how the Congress had hoped to deliver on its 2014 manifesto for a quota for the poor.
Law Minister Ravi Shankar Prasad said the 10 per cent quota rule, once it comes into force, would apply to all central and state government jobs. He also stressed that it would not run afoul of the Supreme Court verdict capping reservations at 50 per cent, insisting that this limit was only applicable for reservations on caste lines.
The Congress, which supported the legislation in the Lok Sabha, was sharply critical of the haste with which the government was trying to push the bill, which senior leader Kapil Sibal said, suffered from three fundamental flaws relating to its implementation and constitutionality.
“We support the bill, but are saddened by the way it has been brought. It’s a very important bill, so it should have been sent to a select committee,” Kapil Sibal, a former minister said.
Sibal, who like Ravi Shankar Prasad is a noted lawyer, appeared to take a dig at Prasad when he said in a lighter vein, how lawyers are passionate about the law but when they become ministers, are passionate about ignoring the law.
Union Minister Ram Vilas Paswan welcomed the Constitution Amendment Bill and demanded that the government should move ahead for reservation in private sector.
“I am happy that government has brought this bill that provides reservation for the economically backward upper castes. This bill does not disturb the existing 50 per cent reservation for Scheduled Castes, Scheduled Tribes and Other Backward Classes,” said the Dalit leader.
The opposition, including the Congress, had strongly protested in the Rajya Sabha during the debate and demanded that the bill be sent to a select committee. MPs from the Congress, the DMK, the RJD and the AAP raised slogans against the government.
DMK’s Kanimozhi demanded that the bill should be sent to a select committee for further scrutiny. Her demand was supported by several other members.
Parliamentary Affairs Minister Vijay Goel accused the opposition of seeking to stall the passage of the bill. Replying to this charge, Congress’s Anand Sharma asserted that his party supported the bill while Rashtriya Janata Dal’s Manoj Jha said the legislation was “interference with the basic structure of the Constitution”.
Trinamool Congress (TMC) MP Derek O’Brien, in his scathing attack on the government, accused it of committing “fraud with the poor and youth” on jobs and “spitting on the Constitution” by moving bills for passage without proper legislative scrutiny. (Agencies)