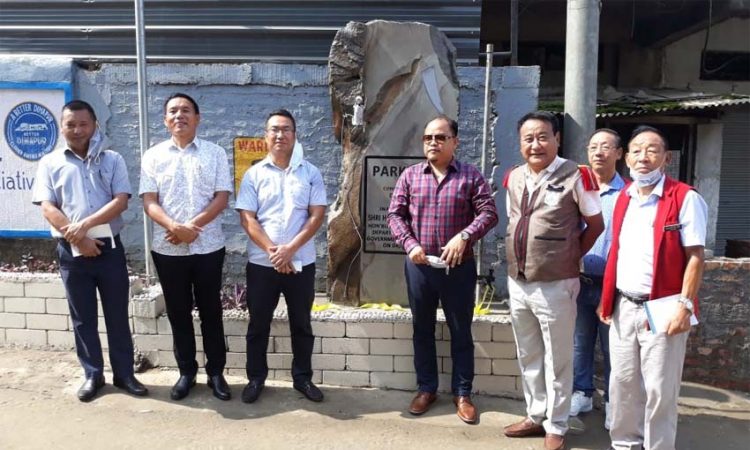 Dimapur, September 4: A ‘Parkway’ constructed near Overbridge Dimapur with the purpose of beautifying Dimapur town, was inaugurated today by MLA & Advisor, Power, Tovihoto Ayemi in presence of host of dignitaries.
An initiative of Better Dimapur in collaboration of Dimapur Municipal Council, the ‘Parkway’ was conceptualized to give travellers and commuters a better look and feel when they pass through. The construction began on July 5, 2021 and was completed within 19 days, however, the inauguration was delayed.

Inaugurating the ‘Parkway’, Tovihoto said this may be very small, but it is very significant as for many years this locality was an eyesore for all passers-by due to dumping of garbage. Today, this has been cleaned and transformed, which looks actually beautiful, he said.
He said all vehicles coming to Nagaland pass through the area, therefore, it is the responsibility of everyone to beautify the city.
Stating that development belongs to all, Tovihoto said it is not of the DMC or any organization, therefore, it is the responsibility of everyone to protect it.
He said Dimapur is rapidly expanding and progressing due to which the DMC has very huge responsibility. He called upon people to cooperate with the DMC to keep the city clean. He also urged everyone to follow waste management at home.
The Power Advisor, who once served the DMC as Chairman, said unless there is an elected body for the Municipal Councils, the Government of India will not sanction funds. “It is time to have Municipal elections,” he stressed.
Commissioner of Police, Rothiho Teteso, IPS said people needs to change their attitude and stop throwing garbage on the road side. He said people should keep dustbins at home and dump their garbage.
He said people just blame, MLAs, Ministers and the Government for everything, adding it is not going to help unless people help themselves.
Taking about the menace of extortion, he said it is our Naga people only. “We have trust deficiency. We should work together,” he said adding it is not impossible to solve the extortion problem.