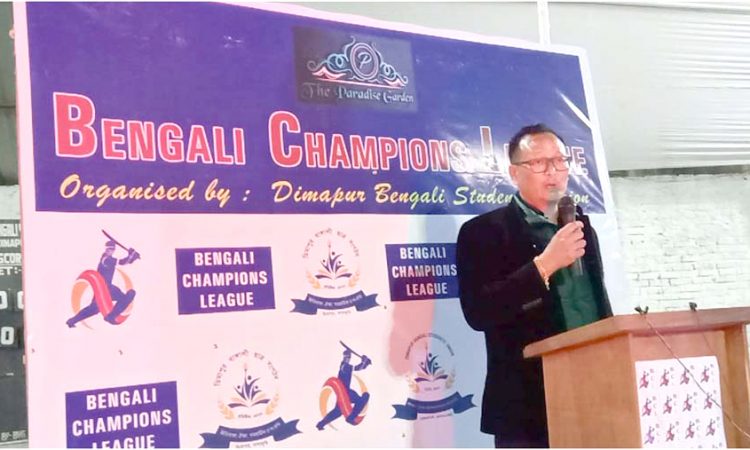 DIMAPUR, JANUARY 31: Nagaland unit president of National People’s Party, Dr. Andrew Ahoto today formally inaugurated the first edition of the Paradise Garden Bengali Champions League, a cricket tournament organized by Dimapur Bengali Students’ Union here at St. Mary’s Montessori Higher Secondary School Dimapur.
Speaking on the occasion, Ahoto lauded DBSU for their active role in serving the society and encouraged the union to be the big brother and continue to do more good works in the days to come.

He urged the youths to come forward and play a pivotal role for the next generation.
In the maiden edition, a total of 12 teams are participating. All the matches would be played at night and each team can have a maximum of seven players at a time on the ground. Divided into leagues, quarter finals, semi finals and final, the tournament is following a ‘Super Six’ template, meaning each innings will consist of just six overs.
The winner of the tournament would be receiving a cash prize of Rs 80,000 and a trophy while the runner up would receive Rs 40,000.
Besides, there will be individual awards such as man of the match, man of the series, Orange Cap (most runs) and Purple Cap (most wickets).
On the first day, two matches were played between Global India vs. Vikings Paradise Garden and Khermahal 11 vs. St. Mary’s 11. The tournament will conclude on February 7.
(Page News Service)