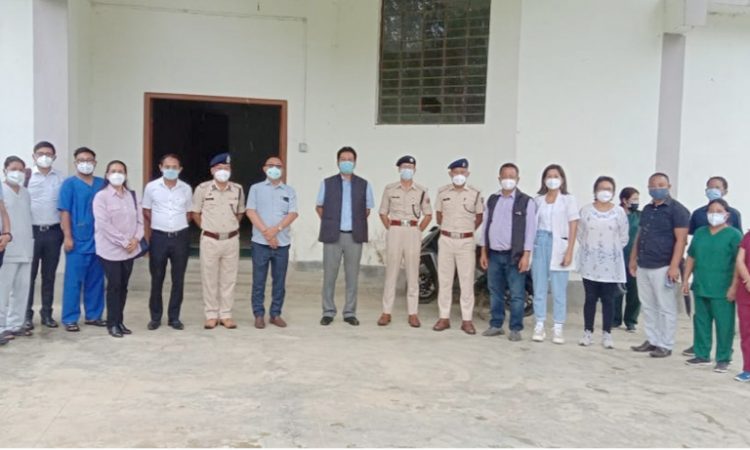 Minister for Health and Family Welfare S Pangnyu Phom with officials during his visit to Longleng on June 19 at DC office complex, Longleng

Dimapur, June 19: Minister for Health and Family Welfare S Pangnyu Phom, accompanied by Secretary for HFW, paid a visit to Longleng and held a COVID-19 review meeting with the District Task Force, Civil Societies and Churches at DC’s office complex on June 19.

Phom informed that the purpose of his visit was to take stock of the situation. He claimed that unlike the first wave, the second one has caused huge casualties in the country “not because of lack of medical facilities but due to negligence of patients who come to the hospital at the last hour”.
Phom congratulated the District Task Force led by the Deputy Commissioner, District Administration, Police, Medical personnel, VGs, NGOs, Civil Societies and Churches for working together as a family to combat the pandemic and making Longleng “one of the successful districts in the State”.
He also appealed to all the government officers and staff posted in the district to come forward and extend their helping hand to the Medical Department and the people during this crucial time.
The Minister also informed that as per directive of the Central Government, the ongoing lockdown will continue in the State till the COVID-19 case is below 5% and asserted that at present Nagaland stands at 9.3%.
Asserting that the Government is giving special focus to health sector to combat the pandemic, he said the PDA government is committed to upgrade the overall healthcare facilities of the State and provide best service to the needs of the people.
He informed that government has decided to deduct 10% from LADP and another 15% from common pool to purchase urgent medical requirements such as oximeter and oxygen concentrator for every functioning sub-centre in the State.