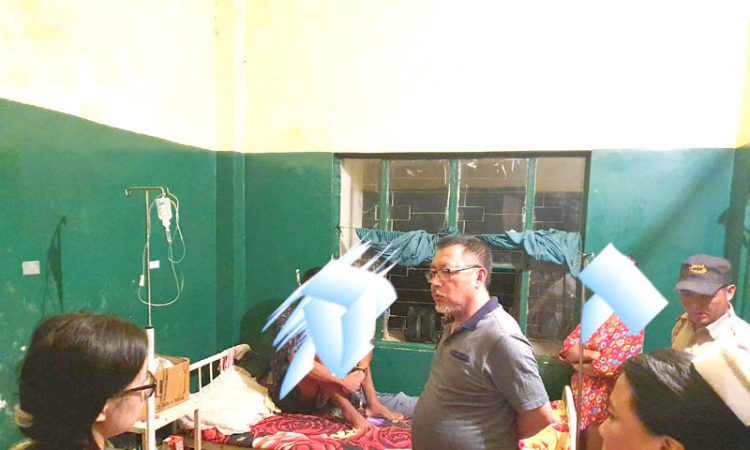 Dimapur, July 14: Nagaland Health Minister S. Pangnyu Phom visited District Hospital Dimapur on Friday and inspected the emergency services in the hospital as well as the prison ward.
During the visit, the Minister observed that the services of the doctor and nurses on duty were good but deployment of single doctor for emergency was found to be insufficient. He instructed that doctor should be increased for better emergency services.
“Visited d Dstrct Hspital Dmp tis evning to see d Emncy Services in d hspital.The services of d doctor n nurses on duty r gud but d deployment of single doctor for emncy found to b insuficint.I hve instructed tat d doctor should b increased 4 better emncy services,” Pangnyu tweeted.
Pangnyu also inspected the single prison ward of the hospital, which is in deplorable condition. The prison ward with two beds can accommodate only two inmates at a time, but on any given day ward has more than 5-7 inmates forcing the patients to sleep on the floor to avail medical attention.
The Health Minister’s visit to the District Hospital prison ward comes after Nagaland Page had exclusively carried a report about the condition of the ward on July 1. The report had highlighted the plights of the prisoners admitted in the ward.
After the visit, Pangnyu tweeted, “During my visitation to the District Hospital Dmp tis evening, I hve also supervised the prison inmates ward and asked d management to find out the possibility for extension of the ward. Will be monitoring the development very closely. @drharshvardhan @Neiphiu_Rio @NagalandPage”.
Talking to Nagaland Page, Superintendent of District Hospital, Dr Kheshito Zhimomi appreciated Page for covering the story, which he said has led to positive development for the hospital.
Dr. Kheshito said, “We need to work hand in hand to develop our infrastructure and during our stint in the office we should bring the change. Simply lamenting after retirement and writing books on our lapses is something odd”.
He also appreciated the visit of the Health Minister to inspect the prison ward and his assurance to take up the prison ward and resolve the issue lingering for long at the earliest under his personal supervision. (Page News Service)