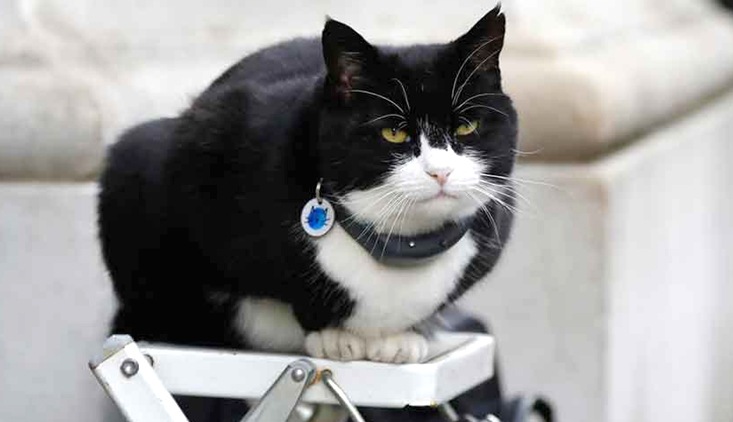 In this file photo dated Tuesday, Feb. 12, 2019, Palmerston, the Foreign Office cat sits on a photographer's ladder at Downing Street in London (AP)

LONDON, AUGUST 8: Palmerston, chief mouser at the Foreign and Commonwealth Office in London with the twitter handle @diplomog and a following of 105,000, is retiring to the countryside after 4 years of keeping the building in Whitehall clear of mice (though he showed an occasional vicious streak by helping himself to duckling from the adjacent St James’s Park).
“We’ll all miss him paw-fully, but wish him a purr-fect retirement,” the FCO account said.
Palmerston’s retirement ~ the big news of the day ~ was announced by the Department’s Permanent Under-Secretary Simon McDonald, who is also leaving, to be replaced on September 1 by Philip Barton, British High Commissioner in Delhi, who is taking charge of the Foreign, Commonwealth and Development Office.
But there is greater sadness at the departure of Palmerston, who was rescued from the Battersea Dogs and Cats Home.
Wishing Palmerston “a long & happy retirement”, McDonald tweeted: “In April 2016, a cat called Palmerston arrived from @battersea…I thought I was employing a mouser. What I got was a social media phenomenon. After 4 happy years, @diplomog will retire: he’s enjoyed lockdown life in countryside so much, he’s accepted invitation to stay. Everyone @foreignoffice will miss him (our mice less so).”
The contents of Palmerston’s formal resignation “letter”, written on foreign office headed notepaper, was disclosed: “Of course I love the hustle and bustle of the office. I will miss hearing the footsteps of an Ambassador and sprinting to my hideout to see who it is. My signature move: pretending to be asleep while overhearing all the foreign dignitaries’ conversations, will be a major loss for our intelligence gathering.”
(Courtesy: TT)