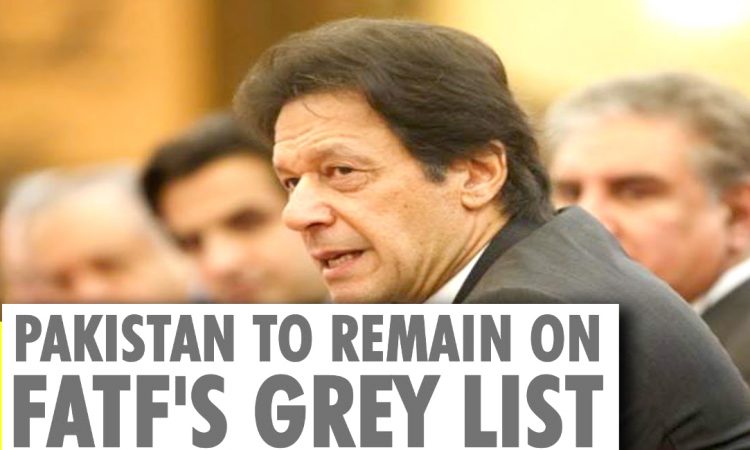 NEW DELHI, October 23: Pakistan will remain on the grey list of the Financial Action Task Force (FATF) as it has not been able to fulfil six out of the 27 mandates to check terror funding.
The virtual plenary of the Financial Action Task Force (FATF), held in the last three days, concluded that Pakistan will continue in its ‘grey’ list.
“To date, Pakistan has made progress across all action plan items and has now largely addressed 21 of the 27 action items. As all action plan deadlines have expired, the FATF strongly urges Pakistan to swiftly complete its full action plan by February 2021,” it said in a statement.
The watchdog said that Pakistan needs to do more to check terror funding, adding that the 6 items which Pakistan is yet to addressed are “serious deficiencies”.
Pleyer said that Pakistan must impose sanction and prosecute those involved in terror financing.
Sources said the tasks in which Pakistan failed to fulfill include failure to take action against all UN designated terrorists.
The FATF had placed Pakistan on the grey list in June 2018 and asked Islamabad to implement a plan of action to curb money laundering and terror financing by the end of 2019, but the deadline was extended later on due to Covid-19 pandemic.
Seeking to wriggle out of the FATF’s grey list, debt-ridden Pakistan in August imposed financial sanctions on 88 banned terror groups and their leaders, including 26/11 Mumbai attack mastermind and Jamaat-ud-Dawa (JuD) chief Hafiz Saeed, Jaish-e-Mohammed (JeM) chief Masood Azhar and underworld don Dawood Ibrahim.
In its third plenary held virtually in June, the FATF decided to keep Pakistan in the grey list as Islamabad failed to check flow of money to terror groups like Lashkar-e-Taiba (LeT) and Jaish-e-Mohammed (JeM).
With Pakistan’s continuation in the ‘grey list’, it is increasingly becoming difficult for the country to get financial aid from the International Monetary Fund (IMF), World Bank, Asian Development Bank (ADB) and the European Union, thus further enhancing problems for the nation which is in a precarious financial situation.
In July, Pakistan’s Senate unanimously approved two bills related to the tough conditions set by the FATF. In August, Parliament’s lower house passed four FATF-related bills as part of the efforts by Pakistan to move from the FATF’s grey list to the white list.
In September, the joint session of the Parliament amended about 15 laws to upgrade its legal system matching international standards as required by the FATF.
India on Thursday had said that Pakistan continues to provide safe havens to terror entities as well as UN-designated terrorists and should remain in the FATF grey list.
The FATF is an inter-governmental body established in 1989 to combat money laundering, terrorist financing, and other related threats to the integrity of the international financial system. It currently has 39 members including two regional organisations – the European Commission and Gulf Cooperation Council. (ToI With inputs from PTI)