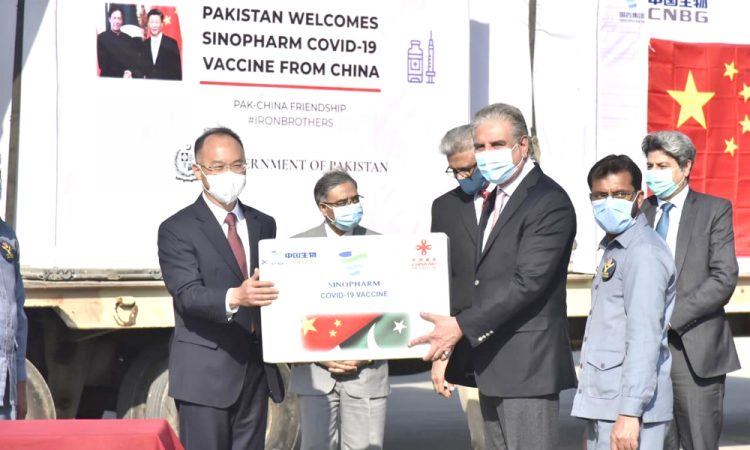 Islamabad, February 1: Pakistan on Monday received the first batch of 500,000 doses of the coronavirus vaccine donated by its closest ally, China, as the country gears up to kick start its immunisation drive later this week.

The vaccines were flown in from China on a special plane of the Pakistan Air Force. The consignment was formally handed over to Foreign Minister Shah Mahmood Qureshi by Chinese Ambassador to Pakistan Nong Rong at Nur Khan Air Base in Rawalpindi.
Alhamdulilah (by the grace of Allah) the first batch of Sinopharm vaccine has arrived! Grateful to China and everyone who made this happen. I salute our frontline healthcare workers for their efforts and they will be first to get vaccinated,” tweeted Dr Faisal Sultan, Advisor on Health to Government.
Pakistan will start its vaccination drive later this week, beginning with frontline health workers. So far, over 400,000 health professionals have applied for the jabs. Next, citizens over 65 years would be vaccinated; their registration will start in 10 to 15 days, according to Planning Minister Asad Umar.
Apart from the free vaccine doses which arrived on Monday, Pakistan will buy another 1.1 million jabs from China, while international vaccine alliance Covax has promised 17 million doses of the Oxford-AstraZeneca vaccine in the first half of the year.
At the ceremony in Nur Khan Ar Base, Qureshi said China had once again given practical demonstration of its friendship with Pakistan.
“This year is even more significant as it marks 70 years since we established diplomatic ties. We have planned to celebrate [the milestone] and open new doors of cooperation and friendship,” he said.
The minister appreciated the top Chinese leadership and its Army for critical help in tackling the pandemic.
Chinese Ambassador Rong said Pakistan is the first country to receive the COVID-19 vaccines for free from the Chinese government.
He said China sees Pakistan as its “closest friend” and “priority for cooperation”.
On 70 years of diplomatic ties, Rong said, “Our friendship is higher than mountains, deeper than the sea and sweeter than honey. Our hearts grow closer in the joint fight against COVID-19.”
Meanwhile, all education institutions in Pakistan, from nursery to university level, were reopened on Monday following an over two-month closure due to a second wave of the coronavirus.
Pakistan had reopened school and colleges in September last year, following a five-month break due to the virus outbreak. However, a second virus wave led to all education institutions getting closed on November 25.
Pakistan had opened schools for grades IX to XII on January 18. Other education institutes were to reopen on February 1.
According to the guidelines, strict compliance with COVID-19 standard operating procedures is mandatory.
Students of each section have been divided into two groups and each group will attend classes for three days in a week.
The move comes as the number of recovered COVID-19 cases in Pakistan has reached 501,252, according to the Ministry of National Health Services.
With the 1,615 new cases reported in the last 24 hours, the country’s virus caseload stands at 546,428.
The death toll is 1,683, including 26 deaths in the last 24 hours. Authorities said 2,092 COVID-19 patients are in critical condition. (PTI)