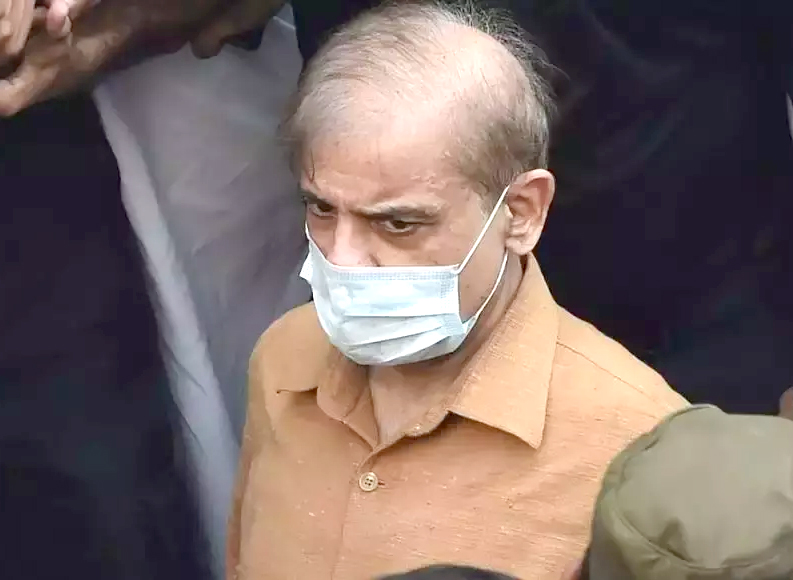 LAHORE, September 29: Pakistan’s Leader of the Opposition and PML-N chief Shahbaz Sharif was on Tuesday sent on a 14- day physical remand by an accountability court in assets beyond means and money laundering case, a day after he was arrested by the National Accountability Bureau (NAB) here.
Shahbaz, the younger brother of three-time former prime minister Nawaz Sharif, was taken into custody from the Lahore High Court’s premises on Monday after the court rejected his bail application in the Rs 700 crores ($41.9 million) money laundering case.
The 69-year-old former chief minister of Punjab province was produced before the accountability court Judge Jawad-ul-Hasan on Tuesday.
Shahbaz requested the court to allow him to present arguments in his defence instead of his lawyer. The court allowed him.
He denied any wrongdoing and said Prime Minister Imran Khan’s nexus with the NAB has made mockery of accountability in the country and they are targeting the opposition leaders only.
“Money laundering charges against me are baseless. I do not do business.
My parents had worked hard to establish business in the country and transferred the same to my children,” he said.
He said being the chief minister of Punjab province his decisions caused a loss of millions of rupees to the businesses of his elder brother Nawaz and his (Shahbaz) son Hamza in order to benefit the public.
Following the arguments, the judge accepted NAB’s request for a 14-day physical remand of Shahbaz and ordered for him to be presented in the court again on October 13.
The court directed that Shahbaz’s performance report be made part of this case.
Shahbaz’s arrest comes just ahead of the planned protests next month by his party – the Pakistan Muslim League-Nawaz (PML-N) – to demand the resignation of Prime Minister Khan.
The Imran Khan government last week filed the money laundering case against Shahbaz, who served as chief minister of Punjab province from 2008 to 2018, and his family.
The anti-graft body has claimed that the assets of Shahbaz’s family ballooned from Rs 20 lakh to Rs 700 crores in the last 30 years, which they have failed to justify.
Nawaz, who has been in London since November 2019 after securing bail on medical grounds in Al-Azizia Mills corruption case in which he was sentenced for seven years, strongly reacted to his brother’s arrest.
In a tweet, Nawaz said, “this puppet government has endorsed the resolution adopted by the opposition’s [multi-party conference].
“Shahbaz Sharif had already said all of the [MPC’s] decisions would be implemented whether he is in prison or outside. No one should be mistaken that such disgraceful tactics will make us bow down.”
“Shahbaz’s arrest is unjustifiable and unacceptable. The Imran Khan regime has broken all records of injustice but we will not be cowed into submission by such tactics,” he said.
PML-N Vice President Maryam Nawaz strongly criticised the arrest of her uncle and party president Shahbaz, saying he was being “punished” for standing by his brother Sharif’s side.
“Make no mistake. Shahbaz Sharif has been arrested ONLY because he REFUSED to play in the hands of those who wanted to use him against his brother (Nawaz Sharif). He preferred standing behind prison bars than to
stand against his brother. Shahbaz Sharif, aap ko SALAM (sic),” she tweeted.
Pakistan People’s Party Chairman Bilawal Bhutto-Zardari also condemned Shahbaz’s arrest, saying Prime Minister Khan was worried after the opposition parties launched an alliance, Pakistan Democratic Movement, to oust his government.
The Opposition was anticipating strong reaction from the government following Sharif’s attack on the military in the multi-party conference over a week ago.
Sharif while addressing the conference via video link from London talked about the Army’s involvement in politics, saying in the country “there is a state above the state.”
The powerful Army, which has ruled Pakistan for more than half of its 70 plus years of existence, has hitherto wielded considerable power in the matters of security and foreign policy.
The Opposition is anticipating more arrests. The NAB has already issued a call up notice to JUI-F chief Maulana Fazlur Rehman who is also leading the joint opposition’s campaign against the government in income beyond means case.
Pakistan’s major opposition parties have demanded “immediate” resignation of Prime Minister Khan and planned countrywide protests next month to oust his government. (PTI)