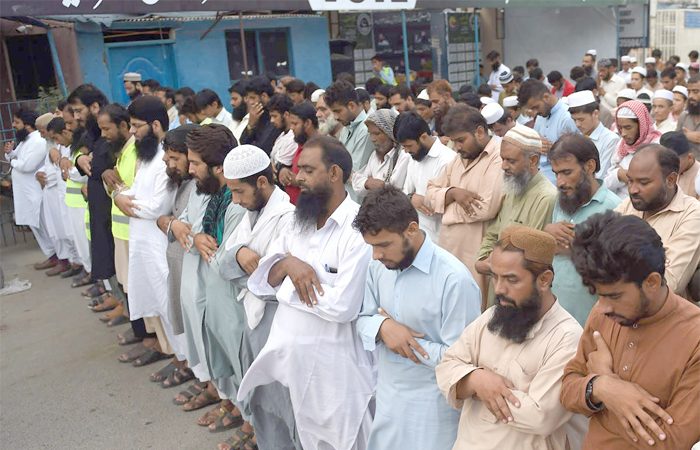 ISLAMABAD, July 15: As Pakistan observed a day of national mourning following the massacre of nearly 150 people in terror attacks ahead of the general elections, leading newspapers have questioned the claims of the government and the army that they have crushed terrorism in the country.
Three deadly back-to-back attacks on election rallies in the restive provinces of Balochistan and Khyber Pakhtunkhwa that killed two prominent political leaders along with around 150 civilians have renewed concerns that violence could disrupt the elections scheduled for July 25.
Reacting to the spate of terror attacks, the Express Tribune, in a stinging editorial, said, “There is a blood-drenched hole in the claim of the government to have rolled back the forces of terrorism in Pakistan.”
The banned Tehreek-e-Taliban Pakistan (TTP) is one of the terror outfits said to be in retreat as a result of sustained efforts by the police, paramilitary and military forces, but not so far in retreat as to be unable to mount lethal bombing operations, it noted.
The death toll in the suicide blast targeting an election rally in the restive Balochistan province reached 130 on Saturday as two people succumbed to injuries, prompting the Pakistan government to announce tomorrow as a day of national mourning over a string of terror attacks that have raised security concerns ahead of the July 25 polls.
With campaigning now in full swing the attack calls into question the effectiveness of the state when it comes to countering organisations such as the TTP, it said.
The caretaker government has been briefed as to the clear and present dangers faced by campaigning politicians, and at the very least ought to be extending the duty of care to encompass the security of candidates of all parties, the editorial said.
The Dawn newspaper in its editorial noted that the sudden upsurge in terrorist incidents calls for several urgent responses, including state protection extended to all candidates who ask for it — without delay. All three candidates who came under attack this week had survived previous attempts on their lives.
Electioneering is a public activity requiring a guarantee of public safety. It is a poor indication of the health of this election if on-ground campaigning is suppressed or forcibly suspended, the editorial said.
It pointed out that these mass-casualty attacks were carried out without apparent warning indicates lapses in intelligence gathering.
In order to ensure peaceful elections, the authorities should not only beef up security but also mobilise the entire intelligence apparatus to do the job they are actually meant to, ie preventing attacks, the paper noted.
With just days for the polling day, every effort must be made to ensure that the election is not derailed by elements hostile to the democratic process, for that is what the perpetrators of these attacks are.
“In many ways, the real battle in 2018 is between pro-democracy and anti-democracy forces. Even now, it is not too late, if the political class were to stand in solidarity to defeat these elements.
“Over 100 Pakistanis lost their lives this week exercising their democratic right to participate in defining this country’s future. It is time to realise what is at stake,” the editorial said.
The News in its editorial said that as the death toll continued to go up, people watched in horror at the violence that has suddenly become a daily nightmare.
“Even though we have repeatedly been told that the back of militancy has been broken, that so many attacks could be carried out in such a short time shows that is far from the case,” it said.
The state needs to explain why it has not done enough to ensure the integrity of the elections by providing those under threat sufficient security. When certain parties are being targeted by militancy, their campaigns are naturally hamstrung putting them at a disadvantage to other parties, the editorial said.
“All this has led to observations that perhaps declarations of victory in the fight against militancy were premature. In fact, we now face many threats as militants wage – as it were – war on our democracy,” the News said.
Three attacks in less than a week are more than enough to discourage people from taking part in the polling process, The Nation commented in its editorial.
“The fact that terrorists are succeeding in targeting political candidates without any hindrance tells us how weak security arrangements are in such sensitive days,” it said.
Though the interim government has condemned all the attacks, it is to remind the government that mere condemnation does not absolve it from the responsibility of ensuring safe and secure elections.
“It is the foremost duty of the interim setup to guarantee not only free and fair elections but also to assure that no one sabotages the entire process by terror means. The attackers are targeting the political parties and their candidates without any discrimination. The state should take notice of the fact that these attacks are nothing but an attempt to sabotage the election process,” the editorial said.
The recent terror attacks on politicians are proof that the fight against militancy is far from over, it said.
“All those institutions making tall claims of ensuring free and fair elections need to re-evaluate their performance. The state should use all its resources to ensure the safety of people in the coming polls,” the editorial added. (PTI)