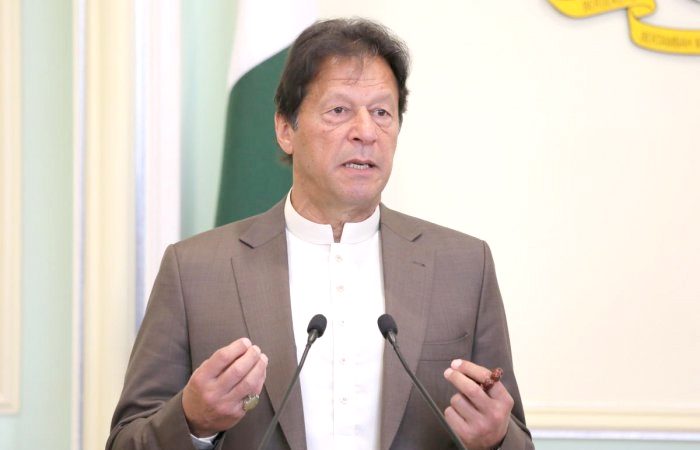 Islamabad, November 10: Pakistan Prime Minister Imran Khan on Tuesday opposed “illegal and unilateral” actions by any country to change the status of disputed regions in violation of UN Security Council resolutions.
Addressing the 20th Shanghai Cooperation Organisation Council of Heads of State (SCO-CHS) meeting through video link, Khan called for the implementation of the UN resolutions to resolve outstanding issues and create an environment for peace and stability.
Unilateral and illegal measures to change the status of disputed territories in violation of the UN Security Council resolutions runs counter to the objective (of the UN) and adversely affects the regional environment, he said without naming any country.
Such measures must be condemned and opposed resolutely for being in violation of the SCO charter and its well-established principle of inter-state relations, he said in the presence of Prime Minister Narendra Modi, Chinese President Xi Jinping, Russian President Vladimir Putin and other top leaders of the eight-member grouping.
Earlier, Prime Minister Modi during his address had hit out at those making repeated attempts to “unnecessarily” bring bilateral issues to the SCO in violation of the bloc’s foundational principles, in an oblique reference to Pakistan raising the Kashmir issue in its past meetings.
Khan said that freedom of speech should not be allowed to insult other religions and their followers.
Deliberately insulting religion and religious beliefs provokes hatred, leading to further polarisation and fragmentation of humanity, he said.
It was wrong to use terrorism-related issues as political tools against a community, race or party, Khan said.
He called for global coordinated efforts to combat the adverse impacts of the COVID-19 pandemic and to fight with its emerging second wave, saying Pakistan in coordination with China was working to develop a vaccine.
He said that Pakistan supported China’s efforts to contain the pandemic by providing protective equipment to the deserving countries, including Pakistan.
The Prime Minister also voiced support for the initiative of G-20 to provide debt relief to poor economies in the days of COVID-19.
Talking about Afghanistan, he said that there was no military solution to the Afghan problem.
Reduction in violence is essential in maintaining peace in Afghanistan and to ensure the return of Afghan Refugees with dignity, he said.
The SCO founding members are China, Russia, Kazakhstan, Kyrgyzstan, Tajikistan and Uzbekistan. India and Pakistan were admitted into the grouping in 2017.
The SCO summit over video link is being organised by Russia, which will also host a virtual summit of BRICS, (Brazil, Russia, India, China, South Africa) leaders on November 17.
India is also set to host the virtual meeting of the SCO Heads of the Government on November 30 in which Chinese Premier Li Keqiang is expected to take part. (PTI)