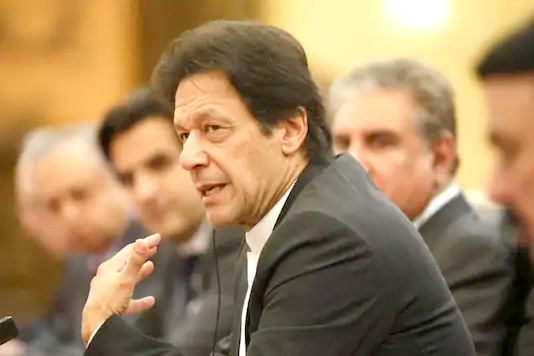 Islamabad, December 10: Pakistan Prime Minister Imran Khan has dared the Opposition alliance to table a no-confidence motion in Parliament to oust him, as he criticised its call to lawmakers for mass resignations to force him to call snap polls.

Khan said he did not backtrack from holding a national dialogue to steer the country out of multiple crises.
An 11-party Opposition alliance announced on Tuesday that their lawmakers will resign en masse by the end of this month from Parliament to paralyse the government and force Prime Minister Khan to call snap polls.
The decision was taken after the Pakistan Democratic Movement (PDM), an alliance of 11 Opposition parties formed in September this year to overthrow Prime Minister Khan’s government, held a marathon meeting in Islamabad.
Khan said the Constitutional way to send a government packing is to table a no-confidence motion in Parliament.
If the Opposition wants to move a no-confidence motion, they should come and do so in the assemblies, he said.
He also criticised the PDM’s call for en masse resignations.
Parliament is the best place for political dialogues and I’m ready to respond to all questions [in Parliament]. Democracy will only work when there is a debate, he said while talking to the media on Wednesday in Sialkot city in Punjab province.
Khan said the Opposition wanted quashing of corruption cases.
We have no problem and the government is ready to hold talks on any issue but the NRO (National Reconciliation Ordinance) like concession will not be discussed, he said, adding that the graft cases would not be closed.
Addressing a ceremony after inaugurating a private airline company, Khan slammed the Opposition parties, saying those who had criticised the government for not imposing a complete lockdown, were now holding public gatherings.
The Opposition alliance has alleged that Khan was supported in the 2018 elections by the ‘establishment’ and also failed to run the country and address chronic issues.
PML-N chief Nawaz Sharif has directly named Army chief General Qamar Javed Bajwa and ISI head Lt Gen Faiz Hameed for meddling in political affairs.
Khan and the Army have rejected these allegations. (PTI)