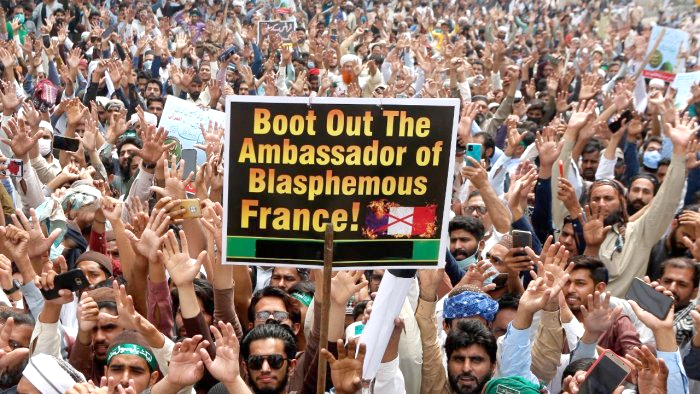 The expulsion of the French ambassador is one of the main four demands of the radical Islamist party. Credit: AP Photo

Islamabad/Lahore, April 20: Pakistan’s government on Tuesday announced to introduce a resolution in Parliament on the expulsion of the French ambassador and quash all cases filed against the banned Tehreek-e-Labbaik Pakistan (TLP) as it reached a deal with the radical Islamist party following a marathon round of talks.

Under a marathon round of talks and an agreement reached with the TLP, a resolution on the expulsion of the French ambassador will be presented on Tuesday in the National Assembly, Interior Minister Sheikh Rashid said in a video statement.
The cases against TLP workers, registered under terrorism charges, will also be quashed. Besides, the names of TLP leaders from the Fourth Schedule will also be taken off, Rashid said.
The expulsion of the French ambassador is one of the main four demands of the radical Islamist party, which was banned last week after its members staged violent anti-France protests across the country.
On Monday, the National Assembly session was adjourned to meet again on April 22. However, shortly after the minister’s statement, it was announced that the schedule had been changed and the session would take place on April 20 at 3pm.
Rashid said that the TLP has agreed to call off its sit-in in Lahore and elsewhere in the country.
Further talks with the TLP will continue, Rashid said while making the video statement before the TLP leaders at its headquarters in Lahore.
The government delegation comprised Rashid, Punjab Governor Chaudhry Sarwar, Federal Religious Affairs Minister Pir Noorul Haq Qadri and Punjab Law Minister Basharay Raja.
The clerics having portfolios in the government had also met TLP chief Saad Rizvi at Kot Lakhpat jail in Lahore on Monday but could not convince him to announce calling off protests across the country.
As the government signed the agreement with the outfit on Tuesday, the TLP workers held a sit-in outside its headquarters in Lahore, the residence of Shiekh Rashid in Rawalpindi and several other parts of the country.
The government has placed containers on roads leading to Rawalpindi and Islamabad and suspended cell phone and internet services in Lahore and some other parts of the country.
The government came on a defensive mode after law enforcers clashed with the TLP workers in Lahore in which three Islamists were killed and 11 policemen taken hostage on Sunday.
The TLP had given an April 20 deadline to expel the French ambassador over cartoons depicting Prophet Mohammad published in France.
The agreement between the government and the TLP came a day after Prime Minister Imran Khan said that the expulsion of the French ambassador from Pakistan was not a solution to stop the incidences of blasphemy in the western world, noting that it will only trigger incidents of blasphemy in other countries as in the West they call it freedom of expression .
After declaring the TLP a proscribed outfit under terrorism laws and freezing its leaders’ bank accounts last week, the Imran Khan-led Pakistan Tehreek-i-Insaf (PTI) government had announced that there would be no talks with the terror outfit.
However, after Sunday’s clash between the law enforcement agencies and the TLP workers in Lahore in which 11 policemen and Rangers were taken hostage by the radicals, the government held talks with the outfit leadership on Monday which ended in an agreement on Tuesday.
The TLP launched a massive protest in November last year against the cartoons but dispersed after the agreement with the government to expel the ambassador by February. The deal was extended until April 20.
The government had promised to take action on the demands of the TLP by bringing a legislation in the parliament.

The TLP shot to fame in 2017 when it held a massive protest for three weeks in the busy Faizabad interchange near Islamabad. The party lifted the lockdown of the city after the then government sacked the law minister. (PTI)