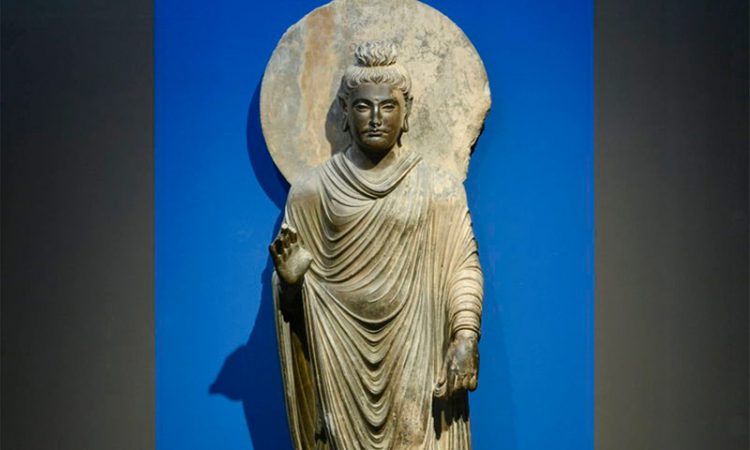 Peshawar July 4: The Pakistan Army has gifted a rare statue of Buddha to the famous Peshawar Museum to enrich its impressive collection and help boost religious tourism in Khyber Pakhtunkhwa, which attracts hundreds of tourists every year.

Khyber Pakhtunkhwa’s old name was Ghandhara and the region is a highly revered place for the followers of Buddhism. Every year, monks from different countries visit the Gandhara region, particularly in Khyber Pakhtunkhwa.
Peshawar Museum is known for having one of the world’s largest collections of architectural pieces on Buddha. A couple of years ago, the museum’s tallest statue of Buddha in schist stone was transported to Switzerland for a display there for 100 days at an international exhibition.
Peshawar Corps Commander Lt. General Muhammad Noman gifted the rare statue that was recovered during excavation in Takhtbai remains by a British major in 1935. It was formally placed at the museum through the authorities of the Archaeology Department.
Director Archaeology Khyber Pakhtunkhwa Dr. Abdus Samad termed it a great gesture .
Samad quoted General Noman as saying Commander as that Peshawar Museum was the right place for the Buddha statue to be displayed for the foreign and Pakistani tourists visiting the museum every year in large numbers.

Around 2000 years earlier at the time of the Kushan dynasty, Gandhara was considered as a seat of learning and people from across the globe came here for knowledge of Buddhism, Nawaz-ud-Din, Research Officer Archeology Department of Khyber Pakhtunkhwa, had said last year.
Khyber Pakhtunkwa, a hub of Buddhism in the past, has a great potential for religious tourism because of its rich archaeological sites, he said. (PTI)