Sign in
Home Sports Oz on course for series-levelling win

Oz on course for series-levelling win 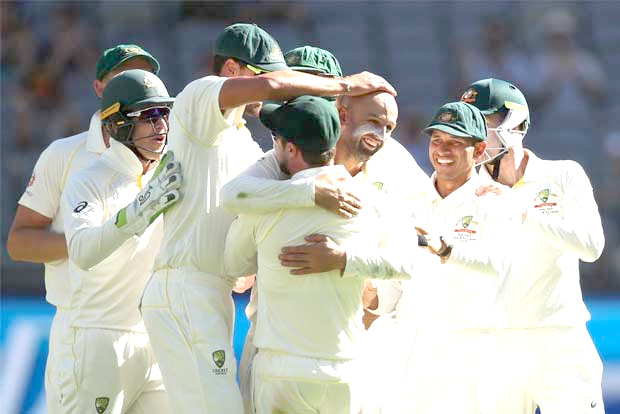 PERTH, December 17: Australia need five wickets in the second Test to secure a series-levelling victory with India’s daunting run chase on a menacing pitch teetering at stumps on day four on Monday.
Chasing 287 runs after bowling out Australia’s second innings for 243, India reached the close at 112 for five with Hanuma Vihari 24 not out and Rishabh Pant unbeaten on nine.
Struggling on the Perth Stadium pitch marked by widening cracks, India made a poor start losing the key wickets of Lokesh Rahul for a fourth-ball duck and Cheteshwar Pujara, India’s first Test hero in Adelaide, for four.
India’s faint hopes rested on captain Virat Kohli who counter-attacked with several flowing drives in reminiscent fashion to his masterful first innings of 123.
Kohli combined with opener Murali Vijay to stabilise India before he edged a straight Nathan Lyon delivery to Usman Khawaja at slip for 17, sparking scenes of jubilation from the Australian players.
The off-spinner claimed the India talisman for a record seventh time, the most by a bowler, and in his next over bowled Vijay for 20 off an inside edge.
Lyon continued his stranglehold over India, continually troubling the batsmen by targeting the expansive rough patches.
Ajinkya Rahane played his strokes and combined well with Vihari before the India vice-captain fell just before stumps, slashing a Josh Hazlewood delivery straight to point for 30.
The bowling onslaught has Australia on the cusp of snapping a barren six-Test run without a win and providing skipper Tim Paine with his first triumph as captain.
Australia’s bowlers regained firm control of the match after their batsmen had crumbled against quick Mohammed Shami in the middle session.
After a wicketless morning session, India came alive through blistering short-pitched bowling from Shami, who made the ball steeple off the deteriorating wicket to finish with a career-best 6-56.
Australia spectacularly lost four wickets for six runs starting with Paine (37) falling to a vicious short ball from Shami, which spat off the pitch hitting the glove and ballooned to slip.
Shami was on a hat-trick when he had Aaron Finch caught behind down the leg-side in a fleeting resumption for the opener Finch retired hurt on day three on 25 after being struck on the glove by a searing short ball from Shami but X-Rays cleared him of serious injury to his right index finger.
Shami was denied the hat-trick but soon claimed his fifth wicket with another menacing bouncer that caught Khawaja’s glove to be caught behind for 72.
Prithvi Shaw ruled out of Test series, Mayank Agarwal, Hardik Pandya called up
It is a sad end to what was expected to be a promising overseas debut series for the prodigious young opener Prithvi Shaw. The Mumbai batsman has been ruled out of the remainder of the Test series against Australia after missing out the first two Tests due to an ankle injury, sustained while fielding in the practice match at Sydney.
Karnataka opener Mayank Agarwal, who has been knocking at the doors of the selectors for a while, has been called up to join the squad in Australia ahead of the third Test, which begins on December 26 at Melbourne.
All-rounder Hardik Pandya, who played his first competitive match in the Ranji Trophy after recovering from a back injury sustained during the Asia Cup, has also been added to the Indian squad ahead of the third and fourth Test match. (Agencies)