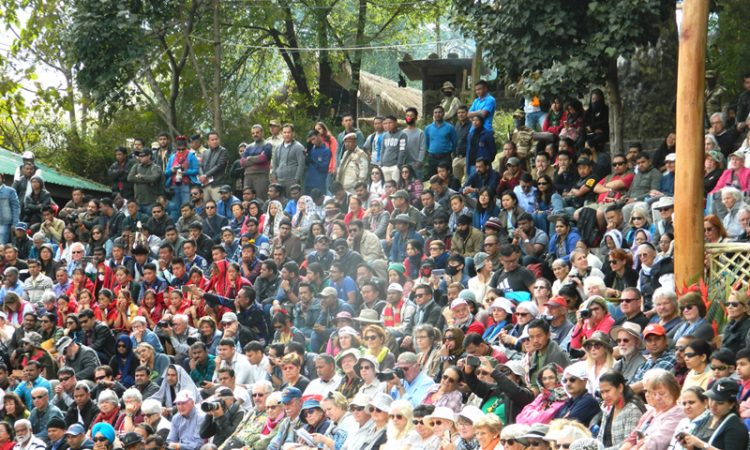 A section of tourist during Hornbill Festival at Kisama on December 2.

Kohima, December 2: More than 60,000 visitors have witnessed the first two days of the Hornbill Festival of Nagaland at Naga Heritage Village Kisama.
Altogether 63032 visitors with 780 foreigners, 8241 domestic tourists and 54,011 local visitors thronging the picturesque venue some 12 kms South of the state capital, said Assistant Director of Tourism Department (Statistics) T Khakihe Sumi.
The inaugural day yesterday had 19,953 visitors while today it rose up to 43,079 visitors, he informed.
The day was marked as National Dance and Music Day on the theme “Cultural Connect” organized North East Zone Cultural Centre (NEZCC).
The visitors were treated with cultural performances from across the country including Odisha, Assam, Manipur, Madhya Pradesh, Meghalaya and Jammu and Kashmir.
Besides, the revelers also got the opportunity to join the coming together of the all the Naga tribes while they were engaged in the unity performance after the NEZCC show.
Exhorting the celebrants today, Nagaland Governor P B Acharya said NEZCC was established with the main objective of promoting and preserving the rich cultural heritage of the NAMASTE states, that is N-Nagaland, A-Arunachal Pradesh, M-Manipur, Meghalaya & Mizoram, A-Assam, S-Sikkim, T-Tripura and E-East.
Stating that North East is well known for its distinct culture and traditional lifestyle and offers a mixed culture of different religion, he said that every tribal group of these states has its own unique tribal culture, tribal folk dance, food and crafts. He said that though each tribe has its own identity, culture, tradition, people live in harmony and peacefully.
Acharya said that Festival season is the best time to know the culture and traditional costumes of North East India and that festival are the integral part of tribes along with traditional dance and folk music.
He said that NEZCC has been the forerunner for preserving, nurturing and disseminating the mosaic of cultures and art forms of the seven North Eastern States since its inception with more than 5000 registered troupes under NEZCC.
“Through this Centre the rich composite culture of the country is also seen through the prism of the local cultural traits and identities,” he said.
Governor said that North East India not only offers a completely different world of traditional music and folk dance but also emerged as one of the prime industry of rock music.
People of North East are talented in arts, skilled in making handicrafts and handlooms and handicrafts and handlooms products are acclaimed worldwide he added. Governor also congratulated the artists, craftsmen, weavers, etc. for their hard work to keep our tradition and culture alive, he said.
Advisor for Tourism, Art and Culture, MLA H. Khehovi Yepthomi, Advisor for Water Resources Development, Namri Nchang and Advisor for Fisheries, Evaluation, Economics & Statistics, L. Khumo were the host for the day’s programme at Kisama.
Besides the cultural performance, handloom and handicrafts and horticulture items at Kisama, the state capital is also brightened with visitors enjoying the night life through Kohima Night Carnival along the stretch of the main town and Traditional Evening Park at Kigwema village. (Page News Service)