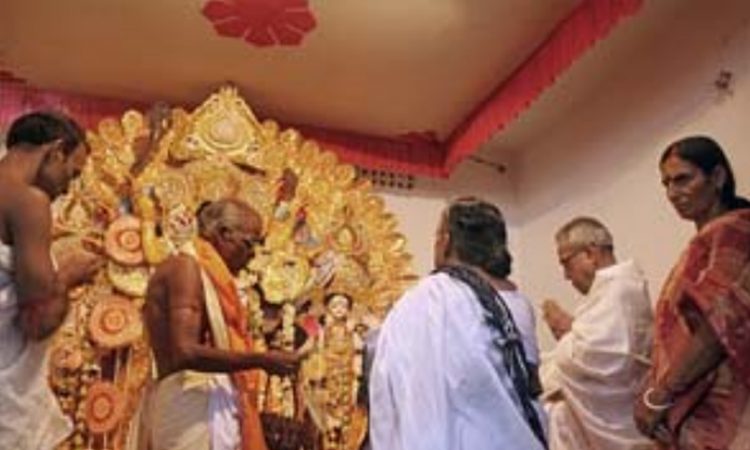 Miriti (WB), October 24: The over 100-year-old Durga Puja at the ancestral house of former President Pranab Mukherjee in West Bengal’s Birbhum district is being organised as usual but for every single moment misses the presence of patriarch, who died in August this year.
From chanting Chandi slokas to supervising every single ritual since the day of ‘Bodhan’ till ‘Bisorjon’ and guiding the priests, Mukherjee was an integral part of this 126-year-old puja which hogged attention of the national and international media.
He would make it a point to come to the village, around 250-km from Kolkata, during the puja days every year amid his hectic schedule as Union minister or President.
He could not visit only during 2015 after his wife’s death.
Head Priest Rabi Chattoraj said “we are missing his physical presence while conducting rituals. As we were performing Mahasaptami and Mahastami puja we missed the guidance of Pranab da. But somehow I feel he is with us and helping us to conduct every ritual smoothly.”
Chattoraj recalls how Mukherjee would memorise the entire scripture and did not have to look at the pages for once.
“He had told us he had been reciting some of the shlokas every day from a young age and knew every step of the puja like the back of his hand. He had a razor sharp memory,” Chattoraj said.
“Every year there would be phone call from him days before the puja from Delhi enquiring about minutest details.
No such call came this year,” Chattoraj said.
Mukherjee’s son Abhijit Mukherjee, who is present at the family puja along with other family members, said “we are following every single ritual as enunciated by father, who had supervised every ritual and was present throughout before the deity even last year. It is hard to believe he is no more around us.”
There is not much media presence this year around this time as Miriti has lost its famous son and the goddess looks sad perhaps. (PTI)