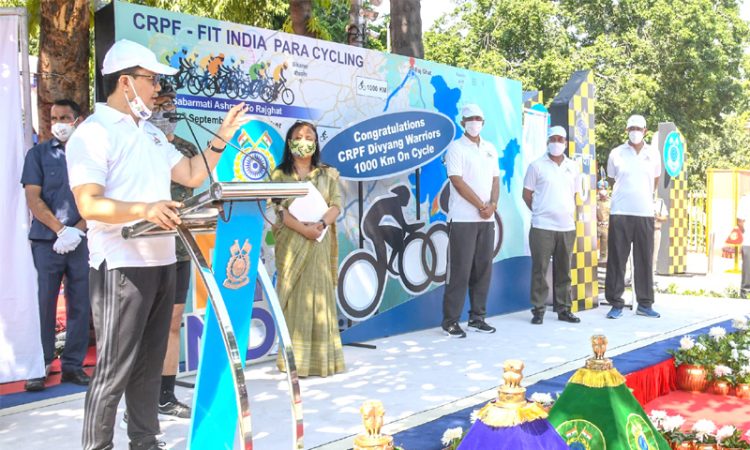 NEW DELHI, October 2: More than 10 crore people have participated in the ‘Fit India’ campaign till now that aims to improve the physical and mental health of the citizens, Union Sports Minister Kiren Rijiju said on Friday.
The minister was speaking while receiving a cycle rally of specially-abled CRPF troops who pedalled about 1,000 km in 16 days from Sabarmati Ashram in Ahmedabad to Delhi.
“I conducted a review of the ‘Fit India’ campaign that was launched by Prime Minister Narendra Modi and I am happy to tell you that over 10 crore people have participated in it till now.
“The campaign was launched with an aim to improve the physical and mental health of the citizens,” Rijiju said while addressing the Central Reserve Police Force rally at Rajghat here.
He said when “uniformed forces like the CRPF join such a mission or campaign, they motivate many people.”
This cycle rally of CRPF ‘divyang yoddhas’ (specially-abled warriors) carried the message of peace, determination and passion, he said.
The minister said the Sports Ministry is leaving no stone unturned for providing facilities to the specially-abled sportspersons and athletes.
“The government does not differentiate between athletes…there is no discrimination whether it is a regular athlete or para-athlete,” he said.
All the sportspersons, be it those who compete in regular Olympics or parasports, are achievers and it is a matter of pride that they win medals for the country, Rijiju said.
“We have given instructions in my ministry that no stadium or sporting facility will be considered complete till it has facilities for the specially-abled,” he said.
Much more needs to be done for the para-athletes, the minister added.
CRPF Director General A P Maheshwari also lauded the participants of the rally and said the country’s largest paramilitary force has “drawn a comprehensive policy to skill and re-skill the ‘divyang’ warriors of the force who suffered injuries while serving the nation”.
“This policy aims at first skilling the ‘divyang’ warriors in para-sports and later imparting them technology related skills that will enable them to serve the nation as cyber professionals,” the DG said.
The cycle rally was flagged off from Ahmedabad on September 17 and apart from six women personnel it had CRPF officer R K Singh as a participant.
Singh, a second-in-command rank officer, has been decorated with the Shaurya Chakra for undertaking a daring operation in 2011 against Naxals in Jharkhand.
The officer had to undergo amputation of his left leg after this anti-Maoist operation and he later donned a prosthetic one post surgery. (PTI)