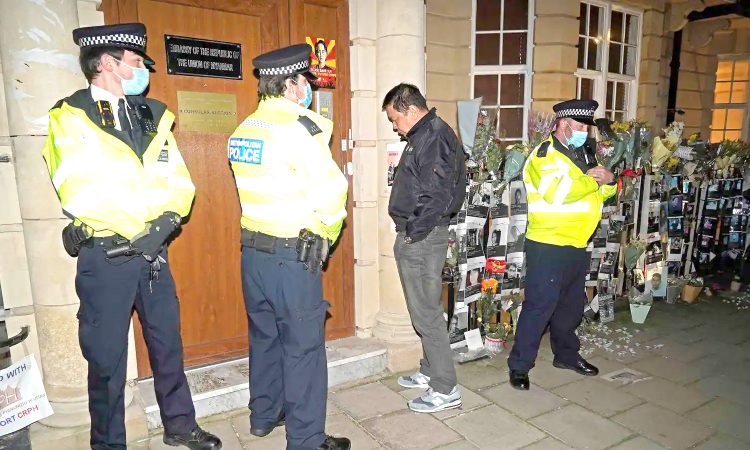 Myanmar's Ambassador to the United Kingdom, Kyaw Zwar Minn, waits unsuccessfully for an answer on the intercom, as police officers stand on duty outside the Myanmar Embassy in London on April 7, 2021. (AFP)

LONDON, April 15: The ousted Myanmar ambassador to Britain has appealed to the British government to help him as he faced eviction from his London residence.
Kyaw Zwar Minn had to spend a night in his car last week after his country’s military attache barred him from the embassy in central London.

He told reporters from behind the padlocked gates of his residence in northwest London on Thursday that he is “not going to go today” and intends to stay despite orders from his former staff that he has to move out.
The former diplomat had called for the release of former elected leader Aung San Suu Kyi, who was detained after the military took power in a coup on February 1.
Asked what he would do over the next few days, he replied: “Who can tell? The last time they seized the embassy without warning, so I need to be careful,”
He did not elaborate on what kind of help he wanted from the British government.
Britain foreign secretary Dominic Raab said last week he condemned the “bullying actions of the Myanmar military regime in London.” Over 700 people in Myanmar have been killed in a brutal crackdown against pro-democracy protesters and others opposed to February’s coup.
Myanmar Security Forces open fire on protesting medical workers: Report
Myanmar security forces opened fire on Thursday on a pro-democracy protest by medical workers in the city of Mandalay, and during more shooting in a nearby area one man was killed and several were wounded, media reported.
Opponents of a Feb. 1 coup that ousted an elected government led by Nobel peace laureate Aung San Suu Kyi have kept up their campaign against the military this traditional New Year week with marches and other displays of resistance.
Medical workers, some of whom have been at the forefront of the campaign against the coup, gathered in the second city of Mandalay early but troops soon arrived to disperse them, opening fire and detaining some people, the BBC’s Burmese-language service said.
The BBC and other news outlets did not have details of casualties or arrests at the protest but Khit Thit media said a man was shot and killed in the compound of a nearby mosque as security forces broke up the medics’ protest.
A spokesman for the junta could not be reached for comment.
A resident of the neighbourhood where the mosque is located said soldiers had arrived there and started shooting, wounding one person who was later taken to hospital.
“There was no protest here. The soldiers just came and seemed to be searching for someone,” the resident, who declined to be identified, said by telephone. The BBC Burmese service reported four people were wounded in that neighborhood.
The five-day New Year holiday, known as Thingyan, began on Tuesday but pro-democracy activists cancelled the usual festivities to focus on their opposition to the generals.
Hundreds of people joined protests marches in several other towns, according to pictures posted by media outlets.
The coup has plunged Myanmar into crisis after 10 years of tentative steps toward democracy, with, in addition to the daily protests, strikes by workers in many sectors that have brought the economy to a standstill.
An activist group, the Assistance Association for Political Prisoners, says the security forces have killed 715 protesters since the ousting of Suu Kyi’s government.
The United Nations human rights office said on Tuesday it feared the military clampdown on the protests risked escalating into a civil conflict, such as that in Syria.
CLASHES
The military says the protests are dwindling but the state-run Global New Light of Myanmar newspaper reported that “rioters” had been committing an increasing number of “terrorist acts”, attacking the security forces with grenades and live ammunition, planting “homemade mines” in public places and starting fires.
“Action will be taken against those perpetrators as soon as possible according to the law,” it said.
The coup has also led to an increase in clashes between the military and ethnic minority forces fighting for autonomy in border regions, in particular in the east and north, where the military has been launching air strikes.
Government forces had suffered heavy casualties in an assault on ethnic Kachin militia in the north this week, the Myanmar Now and Democratic Voice of Burma media groups reported.
State media reported that fighters from the Kachin Independence Army had extorted money from vehicles and set fire to four rice trucks on Tuesday and the army had mounted an operation in response.
Fighting in the area has in the past sent villagers fleeing into China but there have been no reports of people seeking refuge on the Chinese side of the border this time.
In eastern Myanmar, fighting between the army and ethnic Karen insurgents has sent several thousand villagers fleeing into neighbouring Thailand and displaced many more internally, aid groups say.

The United States and other Western countries have imposed limited sanctions focused on the military in response to the coup. Southeast Asian neighbours have been encouraging talks between the rival sides in Myanmar without success.
The U.N. Security Council has called for the release of Suu Kyi and others but stopped short of condemning the coup. (AP/Reuters)