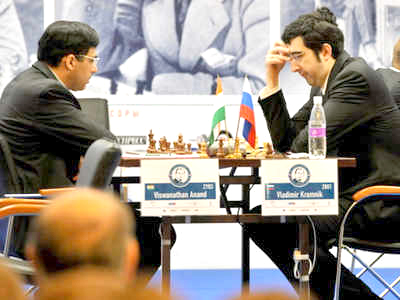 NEW DELHI, September 7: Five-time world champion Viswanathan Anand says there was nothing to separate between him and his one-time arch rival Vladimir Kramnik, who announced a shock retirement in 2019.
Russia’ Kramnik, the first unified world champion, had an intense rivalry with Anand for many years. He lost to Anand in the 2008 World Championships.
“Out of the 20 odd years we have swapped the number 2-3 positions. We were always very close to each other in terms of points, so close that when he retired our scores were absolutely identical even after more than 150 games,” Anand said in the second episode of ‘The Finish Line’, conceptualised by Baseline Ventures.
Kramnik became the first undisputed world champion in 2006, holding both the FIDE and Classical titles, since Garry Kasparov split from FIDE in 1993.
“Well we joined the top of the world chess roughly at the same time, I joined two years ahead of him. At that point I did not remember it yet, but later on he told me that we had met 3 years ago,” Anand said about Kramnik, who defeated the legendary Garry Kasparov in 2000 to become Classical World Chess champion.
“I played him once in 1989 which kind of slipped my mind but I met him again in 1992 and that year was his breakthrough moment,” said the 50- year-old Anand, who held the world champion title between 2007 and 2012.
Asked about certain tricks he needed during the final showdown against Kramnik, Anand said, “Well for the world championship the schedule is fairly luxurious, but that gives you some sort of a starting point. We used to play one white one black, then there is a rest day and it goes on. The idea is to take two games at a time.
“The real difficult moment comes after game 10, because after that he managed to pinpoint one weakness. It was all about making some logical improvisations, but we had done such good work and we had two white pieces.
“So I managed to neutralize him fairly early. In fact the 11th game did not last very long.” (PTI)