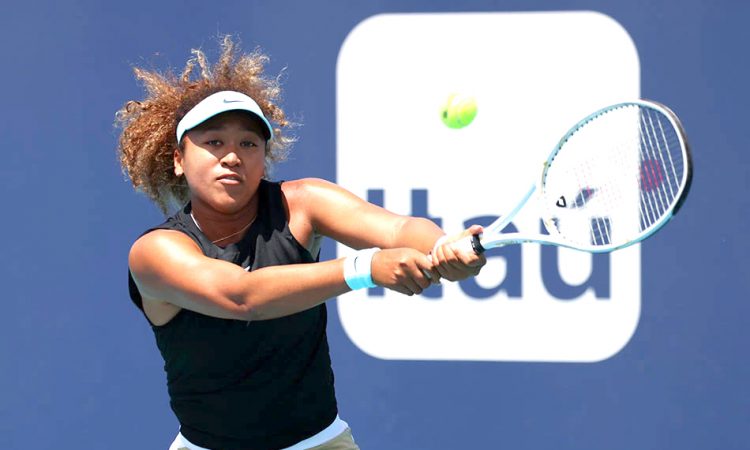 Naomi Osaka of Japan hits a backhand against Maria Sakkari of Greece (not pictured) in a women's singles quarterfinal in the Miami Open at Hard Rock Stadium. Geoff Burke-USA TODAY Sports

MADRID, April 30: Japan’s Naomi Osaka began her bid to capture a first clay court title with a 7-5, 6-2 win over compatriot Misaki Doi in the opening round of the Madrid Open on Friday.

The 23-year-old world number two recovered from an early break to ease into the last 32 in 87 minutes on the back of six aces, the last of which came on match point, and five breaks of serve.
For left-handed Doi, the world 79, it was a 21st loss in 21 meetings against top 10 players.
Osaka, the reigning US and Australian Open champion, has seven career hard court titles to her name, but has never managed to lift a clay court trophy.
The closest she came to breaking that run was a semi-final spot in Stuttgart in 2019.
Osaka, a quarter-finalist in Madrid two years ago, will tackle Karolina Muchova, the 20th-ranked Czech, in the next round.
Greek 16th seed Maria Sakkari, who ended Osaka’s 23-match winning run in Miami earlier this month, was also an early winner on Friday.
Sakkari dropped the opening seven games against Amanda Anisimova of the United States before hitting back to win 0-6, 6-1, 6-4.
Like Osaka, big-hitting Aryna Sabalenka of Belarus, a nine-time champion on the WTA Tour, is still seeking a first clay court title.
On Friday, the 22-year-old at least broke her Madrid duck after first round exits in 2018 and 2019.
Sabalenka was too strong for 36-year-old Vera Zvonareva of Russia, winning 6-1, 6-2.
Jessica Pegula of the United States defeated Romania’s Sorana Cirstea 7-6 (7/5), 6-3.