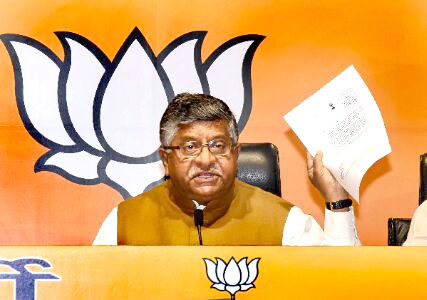 New Delhi, December 7: With the opposition rallying around the farmers’ protest against the Narendra Modi government’s agri reforms, the BJP on Monday accused its rivals of “shameful double standards” as it claimed that parties like the Congress and the NCP had once supported what are now key provisions of the new laws.
Noting that opposition parties have backed the protesting farmer unions’ call for ‘Bharat Bandh’ on Tuesday, senior BJP leader and Union minister Ravi Shankar Prasad said they have joined the agitation in a bid to save their existence after being repeatedly rejected by people in different elections across the country.
He said a section of farmers has fallen in the grip of some people with “vested interests” and asserted that the government was working to address their misgivings about the reforms, which have drawn strong protests from different groups of cultivators, especially from Punjab.
He appreciated the protesting farmer unions for not associating their stir with any political parties.
Addressing a press conference, the BJP leader said the Congress’ manifesto for the 2019 Lok Sabha polls had promised repeal of the Agricultural Produce Market Committee Act and make agri-trade free from all restrictions.
“In 2013, Rahul Gandhi had given direction to all the chief ministers of Congress-ruled states to delist fruits and vegetables from the APMC and allow them to sell it directly in the open market,” Prasad said.
NCP chief Sarad Pawar had written as the Union agriculture minister in the UPA government to chief ministers, strongly advocating for greater participation of the private sector in the farm sector and highlighting the need for making suitable regulatory and policy changes for that, Prasad said.
“In a 2005 interview, Sharad Pawar had said the APMC Act will be abolished in six months. He had further said that the states would not get financial support from the Centre unless they are ready to amend the Act and allow the private sector to enter the field,” he said, adding the laws enacted by the Modi government have made way for what the Congress and the NCP once called for.
“Now they are opposing what they had been working to do when in power. This exposes their shameful double standards. This is opposition for the sake of opposition,” Prasad said, slamming the BJP’s rivals.
The BJP leader said the erstwhile Planning Commission, which has now been replaced by the NIYI Aayog, had recommended a Inter-state Agriculture Produce Trade and Commerce Regulation Act when the UPA was in power.
Contract farming was also recommended during the UPA government and several state governments implemented contract farming in their states, Prasad said.
Hitting out at Delhi Chief Minister Arvind Kejriwal, he said the AAP government notified the new agriculture law in November but is now opposing it.
The Union minister reiterated the government’s commitment to the continuation of the minimum support price mechanism and agri mandis, noting that 318 lakh tonnes of paddy worth Rs 60,000 crore were procured by November and out of this 202 lakh tonne was lifted from Punjab alone.
Opposition parties, including many regional outfits, on Sunday came out in strong support of the ‘Bharat Bandh’ on December 8 called by farmer unions which have been protesting on Delhi’s borders for 11 days demanding the repeal of the Centre’s new agri-marketing laws.
Prominent leaders including Congress president Sonia Gandhi, NCP leader Sharad Pawar, CPI(M) general secretary Sitaram Yechury, DMK chief M K Stalin and PAGD chairman Farooq Abdullah also issued a joint statement backing the proposed day-long strike and pressed the Centre to meet the legitimate demands of the protesters.
The three farm laws enacted in September have been projected by the government as major reforms in the agriculture sector that will remove the middlemen and allow farmers to sell anywhere in the country.
However, the protesting farmers have expressed apprehension that the new laws would pave the way for eliminating the safety cushion of Minimum Support Price and do away with the mandis, leaving them at the mercy of big corporates. The Centre has repeatedly asserted that these mechanisms will remain. (PTI)