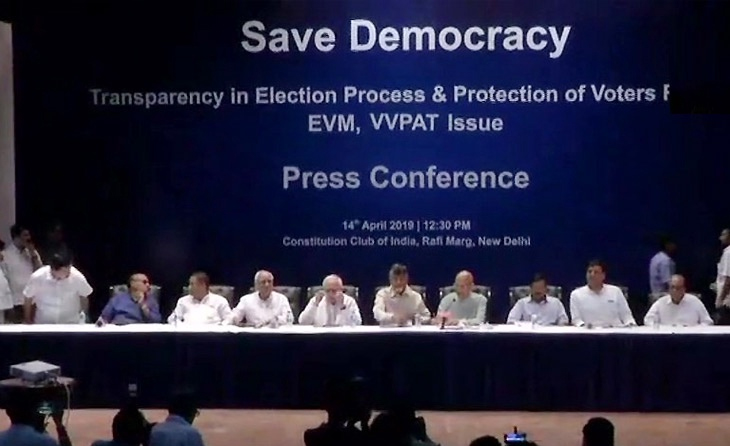 New Delhi, April 14: Telugu Desam Party chief Chandrababu Naidu led opposition parties in demanding that 50% EVMs be verified against Voter Verified Paper Trail machines and suggested the ballot paper system be restored.
Addressing a press conference in New Delhi, over 20 opposition parties, who met for the first time since the first phase of Lok Sabha elections 2019, pointed out that many countries have reverted to the ballot paper due to shortcomings of EVMs.
Naidu said that the parties are raising their doubts regarding the EVMs with the Election Commission of India.
“The confidence of the voter can only be restored through paper trail machines,” Naidu told the media.
Citing the examples of Germany and The Netherlands, the Andhra Pradesh Chief Minister said that they initially started using EVMs but went back to the ballot paper.
“Germany used EVMs between 2005 and 09, and again they have gone for paper ballot. The Netherlands in 1990-2007, and again they have changed for paper ballot. Ireland – between 2002 and 04, and then they have gone for paper ballot,” he said referring to three European nations known for their economy and democratic freedom.
Questioning the reliability of the EVMs, Naidu stressed that voter confidence can be restored only through paper trail machines.
“EC is acting under BJP, they are not correct. They have to act impartially which they are not doing. Also, we doubt even EVMs are under manipulation and that’s why we are demanding 50 per cent counting of VVPATs. They are not agreeing,” he told ANI.
Congress leader Abhishek Manu Singhvi, who was among the leaders who attended the conference, said that the opposition parties will raise the matter in the Supreme Court.
“Questions were raised after the first phase of election. We don’t think EC is paying adequate attention. If you press the button before X Party, vote goes to Y party. VVPAT displays only for 3 seconds, instead of 7 seconds,” Singhvi was quoted as saying by ANI.
“Names of lakhs of voters are deleted online without physical verification. There is a long list the parties have given to EC. It has become even more necessary to count at least 50% of the paper trail of VVPAT. We will demand the same in Supreme Court,” he added.
The press conference was also attended by Aam Aadmi Party chief Arvind Kejriwal and Congress leader Kapil Sibal.
There were reports of malfunctioning of EVMs in Andhra Pradesh where both Lok Sabha and Assembly polls were held simultaneously. Naidu had then demanded a re-election on 150 of seats.
In his meeting with Chief Election Commissioner Sunil Arora on Saturday, Naidu complained that the poll body “miserably failed to live up to the spirit of the constitutional duty” in the state.
Nearly 25 lakh votes were deleted in Telangana, which was later admitted to by the EC. “They admitted and said ‘sorry’. Is it the price to pay?” Naidu asked.
Delhi Chief Minister Kejriwal took a jibe at the BJP saying that “only one party is against the counting of VVPAT slips because the EVM malfunctioning is clearly helping them”. (Courtesy: TS)