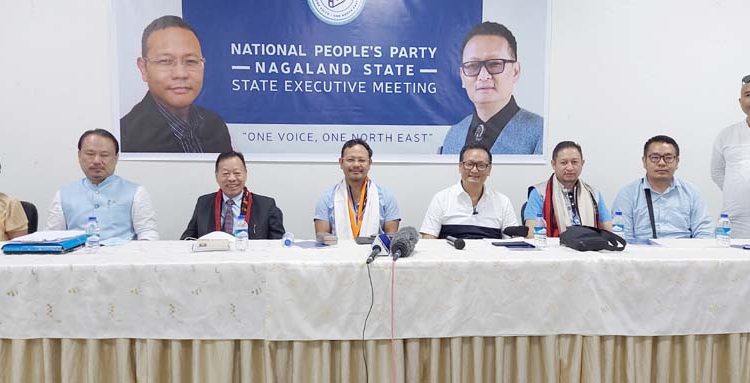 DIMAPUR, SEPTEMBER 4: National General Secretary of National People’s Party (NPP), James Sangma today said that an opposition-less Government is not only “unhealthy but a dangerous trend” and asserted that it is good to have an opposition in a democracy.
Interacting with media persons here at Hotel Saramati after attending the state executive meeting of the NPP, Sangma said, “the concept of democracy resolves around debate and a decision making… so the whole crux of democracy becomes meaningless if you don’t have a vibrant opposition.”

“I think for democracy to really really work, there needs to exist a very very strong opposition. And in a system of democracy where there is no opposition, it is going to be very harmful”, he further said.
Not just for democracy, but State or governance, administration …and this is not just unhealthy but a dangerous trend.
He said it is good to have an opposition which is constructive, which does not just criticize but provide constructive criticism.
Replying to a query on the long-standing Naga political issue, the NPP General Secretary said the concept of peace is elusive not just in Nagaland but in the entire Northeastern region.
“We really look for peace in Nagaland that will have a lasting effect in the entire region and even in Meghalaya”, he said adding it requires a very strong political will and “I feel that it is absent.”
Sangma, who also a Minister in Meghalaya Government, said that today’s meeting was basically on how to strengthen the NPP party and get more enrolments.
Replying to a query he said that the NPP wants to make sure it becomes the voice of the people in the Northeast.
He said the NPP has been actively working in the State of Nagaland and they are looking to further strengthen the party.
To a query on the two Nagaland legislators who defected from NPP and joined other political party after the last general elections, Sangma said the case is pending in Supreme Court and the party is pursuing the case.
President of Nagaland unit of NPP, Andrew Ahoto talked about leadership in a political party and asked whether the State has a leader for tomorrow. Stating that one has to understand the dynamism of the party, he said a good leader is needed for a good State.

He said that NPP is the only party to become a national party within 7 years. He said a regional party is also important but “if you want to be heard, you have to be a national party”.
Claiming that NPP is going to set trends in the Northeast, Ahoto said that if all the 25 MPs from the Northeastern States come from one party, “we can rock.”
“We can only unite the Northeast, not by religion, linguistic, etc., but politically…that is why there is NPP”, he asserted, adding 25 MPs from Northeast can do wonders.
Replying to a query on the Naga issue, Ahoto said the first and foremost everybody wants is peace.
However, he accused the present Government of not being serious in handling the Naga issue and said it should not “play cats and gods game”.
The NPP president said for peace settlement, the Government should have called all the civil societies, NGO, all Hohos, all tribal organizations and come to the table every month and have debate on the issue. “If at all there is so much concern, they (legislators) all should step down and inform the Government of India that Nagaland will have no representative till this problem is solved”, he said.

Stating that the PDA Government should do it, Ahoto said of them, “No solution is a solution for them.” “We need a serious person to lead and seek the solution and it has to happen within a time frame”, he said adding, when there is election they talk about the Naga solution and when they get elected they keep quite.
“We want solution and we will fight for them. We have already mentioned in our manifesto”, reiterated.
When asked whether the NPP would give importance to young leaders or go for older ones, the NPP president said there should be a retirement age in politics also. “We also need to have standard test, qualification for politicians. We need people who are working for the population, not for themselves. Elderly people should be advisors”, he added.
SEC Advisor, Deo Nukhu said that recently Chief Minister convened the meeting of tribal hohos, but he refused to take Naga Hoho, the apex body of the Nagas into confidence. “If we say Naga political problem, please cover all the Nagas in other Northeastern States”, he said.
(Page News Service)