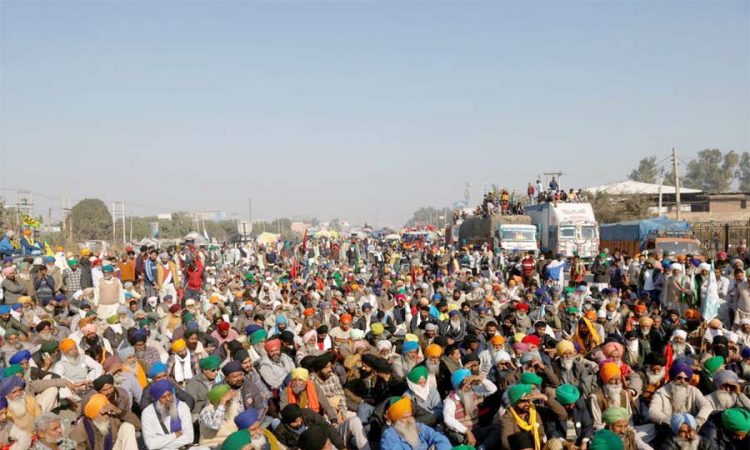 New Delhi, February 3: Several opposition parties including the Congress and the DMK on Wednesday asked the government to withdraw the three contentious farm laws without making it a prestige issue and not to treat the agitating farmers as “enemies”.

Participating in the discussion on the Motion on Thanks to President’s Address to the joint sitting of Parliament, Leader of Opposition in Rajya Sabha and Congress member Ghulam Nabi Azad suggested that Prime Minister Narendra Modi himself should make the announcement on repeal of the laws. Modi was present in the House at the time.
Declaring that disrespect to the national flag cannot be tolerated, he also condemned the violence at the Red Fort during the farmers’ tractor rally on Republic Day.
“I urge the government to withdraw these three bills,” he said, and added that the government should set up a committee to find out the whereabouts of people “who have gone missing” during the farmers’ protest. The senior Congress leader cited several examples, including one during his own party’s rule in 1988, of the government giving in to the demands of farmers.
Highlighting the problems which farmers would face because of the new laws, Azad said government should not see repealing of the legislations as a “prestige issue”.
Describing farmers as “annadata”, the Congress veteran said there was no point in confronting them. Instead, the government should focus on other important issues, including on revival of the economy.
DMK MP Tiruchi Siva sought assurance from the government and the prime minister on the repeal of the three contentious laws that have led to protests at border points of the national capital and several parts of the country.
He also expressed concern over the manner in which the farm bills were passed last year, but Rajya Sabha Chairman M Venkaiah Naidu said that everything was done according to rule.
“As per the demand of our party president M K Stalin, I would urge the government, the prime minister in his reply should assure repealing of these farm laws,” Siva said.
Attacking the Centre for heavy barricading of farmer protest sites in the national capital, Samajwadi Party leader Ram Gopal Yadav urged the government not to treat farmers as “enemies” and concede to their demand for repeal of these laws.
Yadav alleged that the government has become “merciless and cruel’ as it is not even been affected by the death of some farmers during the ongoing agitation.
Warning that bigwigs in power have to step down when farmers revolt, the SP leader said, “People should not be power-drunk. You should talk with farmers. This is democracy. They are a larger chunk of our population. Please go and convince them…. Tell that you will withdraw these laws and bring a new bill.”
He also demanded the government announce a compensation of Rs 20 lakh to family of those who died during the protest and a government job to their children.
“Our farmers are sitting for months on protest. Many farmers have lost their lives due to cold, hunger and other reasons. But the government has become merciless and cruel. Nothing is affecting it. There is no impact,” he said.
On the security at the three protest sites, Yadav said, “Be it Ghazipur, Tikri or Singhu, roads are cemented with a bed of nails and concrete walls. The security at protest sites is more than (that in) our Parliament. Even at Pakistan borders, such security is not there. Are they coming to attack Delhi?”
“Are they (farmers) enemies?” he asked.
“Farmers not only feed the country, but those protecting our borders also come from their families. They don’t come from families whom you are working for,” he told the government.
CPI(M) member Elamaram Kareem said these laws were enacted “without proper consideration or taking into confidence the opposition parties”.
He alleged that many farmer leaders have been booked under “fake” charges after the “unfortunate” incident which took place on January 26.
“It (violence) was condemned by the organisers and the opposition parties who are part of the peaceful protest,” he said and charged the government with trying to weaken the democratic protest by perpetuating violence and using force.
“Even electricity and water supplies to the protest sites have been disconnected by the government. I urge the government to yield to the demands of the farmers and withdraw the farm laws immediately,” he added. (PTI)
Thousands of farmers have been protesting at the Delhi borders with Haryana and Uttar Pradesh, demanding a rollback of the three laws — Farmers’ Produce Trade and Commerce (Promotion and Facilitation) Act, Farmers (Empowerment and Protection) Agreement on Price Assurance and Farm Services Act, and the Essential Commodities (Amendment) Act.
The protesting farmers have expressed the apprehension that these laws would pave the way for the dismantling of the minimum support price (MSP) system, leaving them at the “mercy” of big corporations.

However, the government has maintained that the new laws will bring better opportunities to farmers and introduce new technologies in agriculture.
Eleven rounds of formal talks between the government and the protesting farmer unions failed to break the deadlock. While unions have stuck to their main demand of repeal of the laws and legal guarantee of MSP, the government has offered some concessions including keeping these laws on hold for 1-1.5 years. Even the Supreme Court has stayed the laws for two months and set up a panel to look into the matter. (PTI)