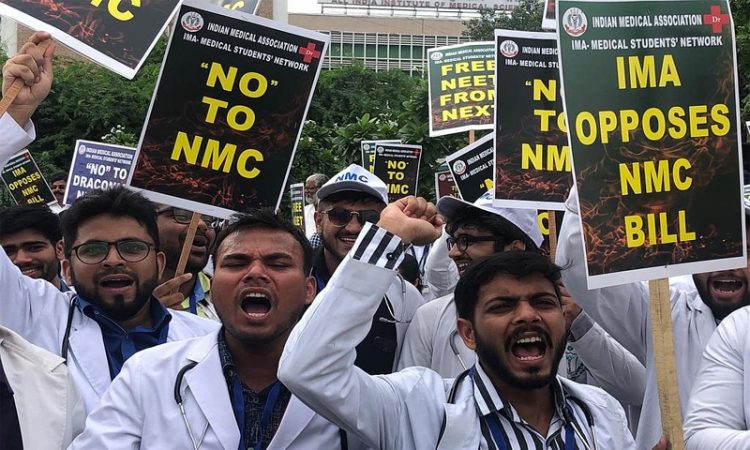 NEW DELHI, JULY 30: The Indian Medical Association (IMA) has called for a nationwide 24-hour withdrawal of non-essential services from 6 a.m. on Wednesday in protest against the passing of the National Medical Commission (NMC) Bill, 2019 in Lok Sabha.
OPDs in Government hospitals across the country will be shut on Wednesday as part of protests against the bill.
Demonstrations and hunger strikes will be held in all states. The IMA has asked medical students to boycott classes in solidarity.
The Federation of Resident Doctors Association (FORDA) and the Resident Doctors Association (RDA), AIIMS, have asked members to wear black badges.
“The Bill if not amended will only lead to a deterioration in the standards in medical education but will also lead to degradation of healthcare services,” an RDA statement said.
The non-essential services including OPDs will be shut from 6 a.m. on Wednesday till 6 a.m. on Thursday. Emergency, casualty, ICU and related services will function normally.
“Section 32 of the NMC Bill provides for licensing of 3.5 lakh unqualified non-medical persons to practise modern medicine. The term Community Health Provider has been vaguely defined to allow anyone connected with modern medicine to get registered in NMC and be licensed to practise modern medicine,”said RV Asokan, Secretary-General, IMA.
“This would mean that all paramedics including pharmacists, nurses, physiotherapists, optometrists and others are becoming eligible to practise modern medicine and prescribe independently. This law legalizes quackery,” said Asokan.
The Lok Sabha on Monday passed the National Medical Commission Bill, 2019 which proposes to regulate the fees and other charges of up to 50% of the total seats in private medical colleges and deemed universities.
The Bill is aimed at bringing transparency, accountability and quality in the governance of medical education in the country.
Asserting that it is one of the “greatest major reforms” for the future of the country, Union Health Minister Harsh Vardhan said the Indian Medical Council (Amendment) Bill, 2019 is “pro-public” and it would bring down the cost of medical education.
The Bill proposes a common final-year MBBS examination, known as National Exit Test (NEXT), for admission to post-graduate medical courses and for obtaining a licence to practice medicine.
Besides this, the National Eligibility-cum-Entrance Test (NEET), common counselling and NEXT would be applicable to institutes of national importance like AIIMS in order to achieve a common standard in medical education in the country.
The Bill provides for supersession of Medical Council of India (MCI) for a period of 2 years with effect from September 26, 2018. It had lapsed after it was introduced in 16th Lok Sabha. The Cabinet had approved the Bill on June 12 to replace the Indian Medical Council (Amendment) Second Ordinance, 2019 through an Act of Parliament.
Arguing on behalf of the Government for its passage, Harsh Vardhan said the Bill seeks to put in place a new structure to tackle challenges in the medical education sector.
“This Bill sets up the National Medical Commission (NMC). Within 3 years of the passage of the Bill, state Governments will establish State Medical Councils. The NMC will consist of 25 members, appointed by the Centre. A common final-year MBBS exam called NEXT will be introduced,” the Minister said.
Before the Lok Sabha Speaker announced the passing of the Bill from the House, Congress members staged a walkout from the House expressing their disagreement.
Other opposition parties including TMC, YSR Congress, DMK and NCP opposed the Bill.
Earlier on Monday, doctors held a protest against the bill outside the All India Institute of Medical Sciences.
The protesting doctors have alleged that the NMC Bill will only give a boost to quacks. They alleged that Section 32 of the proposed NMC Bill will intensify quackery by rural medical practitioners, private medical practitioners and others.
IMA President Santanu Sen said the “Government will have blood on its hands” if Section 32 of the NMC Bill 2019 was not removed.
(TS with agencies’ inputs)