Sign in
Home Top Stories One Man, Many Votes

One Man, Many Votes 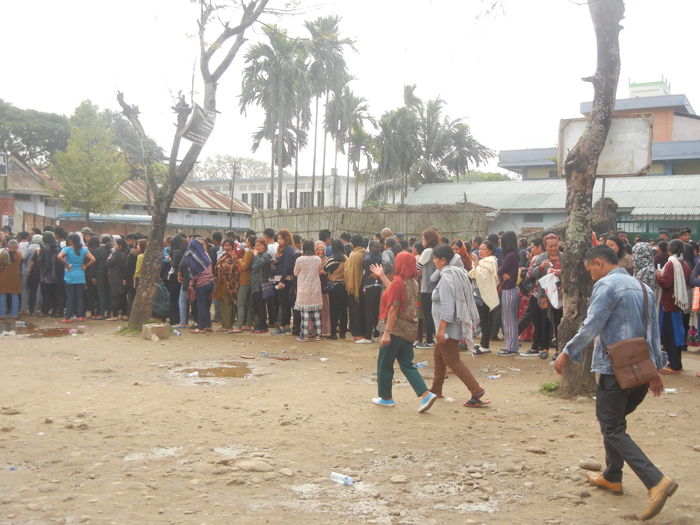 Dimapur, February 27: Large scale proxy voting and use of money to buy votes on polling day demolished the slogans of “One man-One vote” and the “Clean Election Pledge” from political leaders and the Election Commission of India (ECI) measures of videography and CCTVs.
The call for clean election from the Nagaland Baptist Churches Council (NBCC) and the assurance from the state Election Department for strict monitoring of polls simply failed in many parts of the state.
The ECI had ensured to conduct the polls in a free and fair manner by taking several measures such as issue of special sized Voter’s slip, installation of CCTV cameras in polling booths and so called webcasting. But their efforts went in vain as mass proxy voting was observed in many parts of the states. Similarly, the NBCC’s sermon on the elections fell on deaf ears of eligible and non-eligible voters alike.
“I have already voted twice, now I am just looking for another voter slip to vote again,” said a young voter to his friend outside a polling station in Dimapur-II constituency. The ink was applied by the polling officials in many cases, much to the delight of many, on the nails. All they had to do is to apply a chemical solution to wipe it off.
Interestingly, polling officials in several polling booths in Dimapur, never looked up at the voters when they produced the Voter’s slip or asked for any of the listed Identity documents, but just allowed them to cast their vote. This also resulted in some people lodging complaint to the Election Commission of India, demanding action against the polling and presiding officers for allowing people to cast votes in someone else names. A complaint was lodged through the ECI website today by a prominent citizen of Dimapur after he found that someone had cast vote in his name.
While voting may be called again in some polling stations, questions remain on the effectiveness of the ECI’s and local civil society groups’ resolutions and measures.
The anomalies in this election began just few days before the polling day, as most genuine voters found their Voters’ Slips missing in various colonies, which naturally went into the hands of those involved in proxy voting. In some polling booths in Dimapur, voting was almost complete by noon.
A security personnel on duty at a polling station in Kohima expressed surprise at the way polling is being conducted in Nagaland. “In my thirty years of career and performing duties during elections in various states, I have never seen such elections where same people come to vote again and again,” he was quoted as saying.
Incidentally, those in queue waiting for their turn to cast their votes were also heard discussing how many times one has cast votes in a particular polling booth.
What was most interesting to note was that a person had cast votes 5 times in a polling booth by 9 a.m. in such a district where the Church had spearheaded the Clean Election Campaign!
The Election Commission of India had deputed scores of Observers in Nagaland during this poll, but their presence or absence from the polling scenario did not have any effect on the voters. Election Observers were also seen visiting different polling stations in Dimapur, but the proxy voting just continued in a usual manner.
The contesting candidates also visited every polling station to ensure things were alright.
Cash for vote
The slogan of the Election Department, “One Man One Vote” was proved to be a farce in many areas as it turned into “Cash for Vote”, thereby prompting people to vote in large number for easy cash distributed incognito.
While the amount of money spent by contesting candidates during this election can not be accounted easily, it is not known how Expenditure Observers would react when someone brings out the approximate figures spent by each candidate in the coming days. Behind the scenes, political party leaders concede their candidates have spent obscene amounts of money to buy votes. (Page News Service)