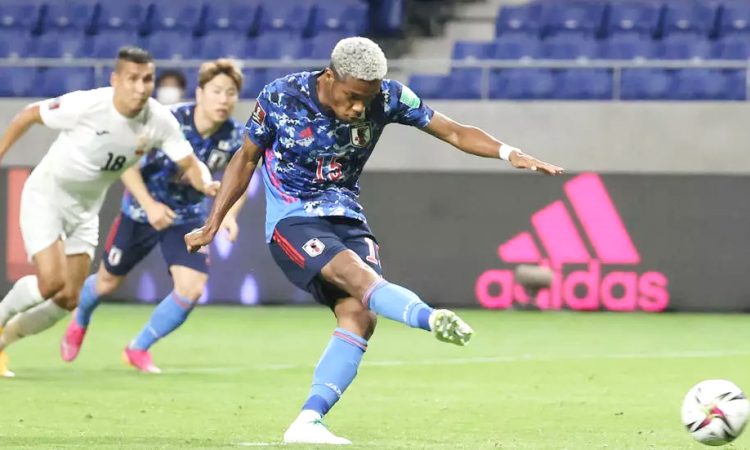 SUITA (Japan), June 15: Striker Ado Onaiwu bagged a six-minute first-half hat-trick as Japan confirmed their dominance in Group F of Asian 2022 World Cup qualifying with a crushing 5-1 win over the Kyrgyz Republic in Suita on Tuesday.

Manager Hajime Moriyasu made five changes to the side that beat Tajikistan 4-1 a week ago and opted for Onaiwu to lead the attack in the absence of Takumi Minamino, who withdrew from the squad last week “due to club circumstances”.
Onaiwu did not disappoint, opening the scoring from the penalty spot in the 27th minute after a handball by Aizar Akmatov.
He tapped in for his second four minutes later at the far post after good work down the right by Kawabe Hayao and completed his quickfire treble in the 33rd minute with a towering header.
Takuma Asano and Sho Sasaki added two more after the break while Kyrgyz captain Mirlan Murzaev scored their consolation penalty in first-half stoppage time.
Minamino, who had netted in all seven of Japan’s group matches, reportedly left after playing in the 1-0 friendly win against Serbia on Thursday in order to sort out a move from Premier League Liverpool to Southampton with qualification secured.
Minamino, who spent much of last season on loan at Southampton, had tied a national record set by Japan hero Keisuke Honda by scoring in seven consecutive qualifying matches with his goal in the 4-1 win against Tajikistan eight days ago.
“Takumi Minamino will be leaving due to club circumstances,” said a brief statement from the Japan Football Association.
Onaiwu’s hat-trick was not the fastest hat-trick in World Cup history and was almost pedestrian compared with Egypt substitute Abdul Hamid Bassiouny’s 2001 effort.
Bassiouny took just 117 seconds to score three times after coming on in the 8-2 win against Namibia in a African qualifying match.
The dominant Samurai Blue confirmed their place at the AFC 2023 Asian Cup in China and in the final round of Qatar World Cup 2022 Qualifiers with a perfect eight wins from eight, scoring 46 goals and conceding only two.
In the other Group F match, Tajikistan beat Myanmar 4-0 in Osaka to seal second place.

Only the top team in each of the eight groups automatically progress to the third phase of World Cup qualifying, where they will be joined by the best four group runners-up. (AFP)