The demand of ENSF for 45% Job Reservation under the Nagaland Staff Selection Board (NSSB) has invited vociferous opposition from NSF and other Students’ Bodies. This subject has opened another pandora’s box for everyone to argue for and against it, mostly based on their tribal organizationalaffiliations. This sensitive issue should be looked into objectively and dealt with sanely by hearing both sides and arriving at a consensus acceptable to both. Just as during the demand made to State Government to constitute Nagaland Staff Selection Board, NSF and ENSF stood and fought together there should be a conversation between the two to amicably resolve it. The State Government has done its part by fulfilling the aspirations of the Students’ community for NSSB and, it would be great injustice to further derail its implementation at this stage when all modalities for the same is almost set.
The Constitution of India Article 15(4) read with Article 16(4) provides the State Governments for reservation of appointments or post for any backward class of citizen. So there is nothing neither illegal nor unreasonable about the demand of ENSF for reservation under NSSB, as reservation is not permanent and will be subjected to periodical review. What has ruffled the feathers and invoked strong reaction from NSF and others appears to be the 45% reservation demand by ENSF. It is a fact that there already exist 41% Job reservation, out of which 25% have been allotted to Eastern Nagaland tribes. However, it is also a fact that on the ground despite fears by most other advance tribes, existing data indicates that major tribes are still way ahead of the rest and Eastern Nagaland tribes are far less represented than they should be.
The demand of ENSF for 45% Job reservation meant for 6 tribes under NSSB should be looked into holistically, as there are other backward tribes and segments of society like Chakhesang, Pochury, Zealang, Sumis of Kiphire, and the PWDs who will have to be accommodated two. That means the percentage will further escalate in which case reservation percentage may go up to stand among the highest in the country and one at the cost of other advance tribes which is irrational. Therefore, the demand of ENSF for 45% reservation under NSSB in allfairnessshould be at a reasonable percentage of acceptability.That way the job reservation which the eastern Nagaland so deserved is addressed and the genuine reaction of NSF and others opposing the 45% demand are placated.
Time will also come to seriously review reservation/quota ie: Whether the actual deserving ones are getting the reservation or not. It will also be wise to ask what reservation is contributing to the society at large. For eg: Students’ studying till Higher Secondary/College in their respective four Backward Districts can genuinely and boldly claim the reservation. But those privileged students’ who do their studies from other advanced Districts, Cities or even outside States should not take away the reservation meant for the less privileged students/group. Here, the privileged Students’ or job seekers also should not be deprived and placed under reservation by the System just because he/she belonged to the Backward District.
It will benefit the Nagas,if the NSF & ENSF sit down and agree for the larger interest & growth of one and all. The Government too has to give a clear direction so that Reservation/Backward Quota is actually benefiting the genuine and deserving section of the society.
Kiusumong Tikhir
Social Activist
Kohima.

Naga Hills in the 19th Century

Examination of Christian Socialism as a Political Ideology 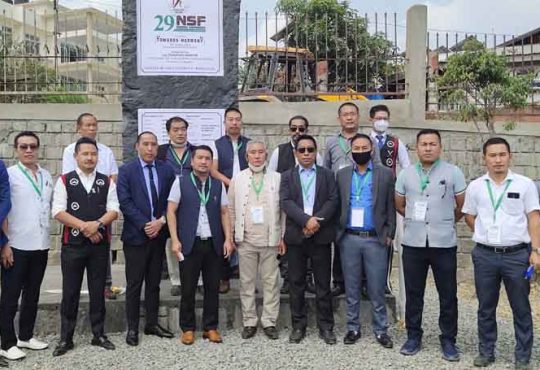