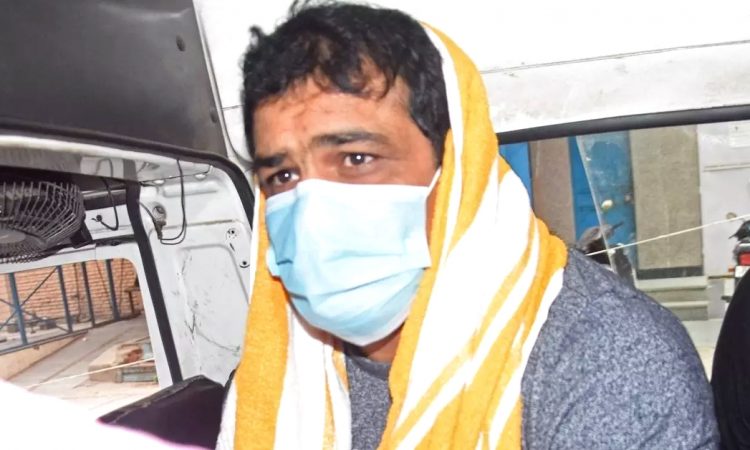 NEW DELHI, May 23: Olympic medallist wrestler Sushil Kumar was on Sunday remanded in police custody for six days over his alleged involvement in the death of a 23-year-old wrestler at Chhatrasal Stadium.
After questioning him for around 30 minutes inside the court, the police sought his custody for 12 days for further interrogation.

Metropolitan Magistrate Divya Malhotra granted the police six-day custody of Kumar, who was arrested, along with co-accused Ajay, on Sunday from outer Delhi’s Mundka area.
Kumar was evading arrest and had been on the run for nearly three weeks.
According to the Delhi police, Sushil Kumar and his associates allegedly assaulted fellow wrestler Sagar Dhankar and two of his friends Sonu and Amit Kumar at the stadium on May 4 night. Sagar succumbed to the injuries later.
During the proceedings, Additional Public Prosecutor Atul Shrivastava, representing the state, told the court that Kumar’s custodial interrogation was required to unearth the whole conspiracy and motive behind the crime.
‘Don’t know what to say’: Mixed emotions in Indian sports after Sushil Kumar’s arrest in murder case
There was lingering disbelief and considerable disappointment as the country’s sports fraternity came to terms with Sushil Kumar’s monumental fall from being one of India’s greatest Olympians to an arrestee in a murder case.
The stockily-built man, who used to be wrapped in the Tri-colour after winning medals for the nation, had his face masked by a towel and both hands held by Delhi Police’s special cell officers on Sunday after being on the run for the past many days.
Ironically, all this unfolded on World Wrestling Day.
He was evading a Non-Bailable Warrant for his alleged involvement in the death of a 23-year-old wrestler Sagar Dhankar during a brawl at the Chhatrasal Stadium, considered the cradle of Indian wrestling, made most famous by Sushil — India’s only sportsperson with two individual Olympic medals.
Dhankar was the son of a Delhi Police constable and trained at the stadium before he died on May 5 because of the injuries he sustained in the brawl.
The chain of events has left the Indian sports fraternity shocked even though respect for Sushil’s achievements remains intact. The 37-year-old is, to this date, India’s only world champion in wrestling and a three-time Commonwealth Games gold-winner.
“What he has done for Indian sports is something that can never be taken away from him. That’s all I want to say at this point. Let things be clearer. I don’t want to comment more,” boxing star Vijender Singh, who has been to two Olympic Games with Sushil, told PTI.
Both Vijender and Sushil won historic bronze medals at the 2008 Beijing Games. Vijender remains India’s sole male Olympic medallist in boxing.
Seasoned table tennis player A Sharath Kamal, who is gearing up for his fourth Olympic appearance, conceded that Indian sport’s image will take a hit. Kamal’s limited interactions with Sushil have taken place during social events as Olympians.
“If this has actually happened, it is unfortunate and reflects badly on Indian sport, not just wrestling,” he said.
“He is one of the best athletes we have had. People look up to him. So if he has done what he has done, it will negatively impact not just wrestlers but athletes from other sports also.”
Former hockey captain Ajitpal Singh, an Indian Olympic Association observer at the 2008 Olympics, recalled interacting with Sushil at the Games and said he still can’t understand what exactly went wrong with the “polite” man.
“…it is very shameful and unfortunate. Being a role model Sushil should have led by example and never indulged in such a brawl. He has got everything in life, the sport gave him everything, money, fame,” he said.
“I met him during the Beijing Olympics where I was an IOA observer and found him to be a very down to earth and polite guy. But having said that everyone needs to know how to handle fame,” he observed.
Many other athletes, to whom PTI reached out for a take on the matter, also described Sushil as a simple person and were baffled by how things took such a turn. They preferred to keep their observations anonymous.
A prominent wrestling colleague of Sushil advised caution while forming opinions.
“Yes he has been arrested but only time and investigation will tell if he was involved or not. But definitely it has hurt the image of wrestling and sport in general. Let’s see what comes out of the investigation,” he said.
“He has two small children, think of the impact on them,” added a top boxer who knew Sushil closely and still can’t make sense of the developments.
Sushil has two sons from his marriage to his coach Satpal Maharaj’s daughter Savi. The couple tied the knot in 2011.
It is not just his brethren in Olympic sports, Sushil was much admired in the cricketing fraternity too. A former cricketer, who has interacted with him at social events, would wait for more details before forming an opinion.
“He is still just an accused.”
“…but having said that, it’s often about the company you keep once you attain a level. It is disappointing but if he is innocent he will certainly get justice,” he said.
A former hockey captain said the fall of a hero of Sushil’s stature is never good for sports in general.
“…if the allegations are correct, it would be the darkest episode in Indian sports. He was a role model for many young athletes,” he said.
A prominent member of the shooting fraternity was still processing what has transpired so far.
“Something like this is unheard of where an Olympian is concerned. It is beyond belief, quite shocking if it has actually happened. I don’t know what to say,” he said.
However, a well-known badminton player felt that Indian sports will survive the setback as new heroes would take shape in times to come.

“…it may affect wrestling for the moment, because he is the biggest name in the sport but in the long run it won’t matter…sports will move on. We have seen spot-fixing and match-fixing happening in cricket but the sport only got bigger,” the shuttler said. (PTI)