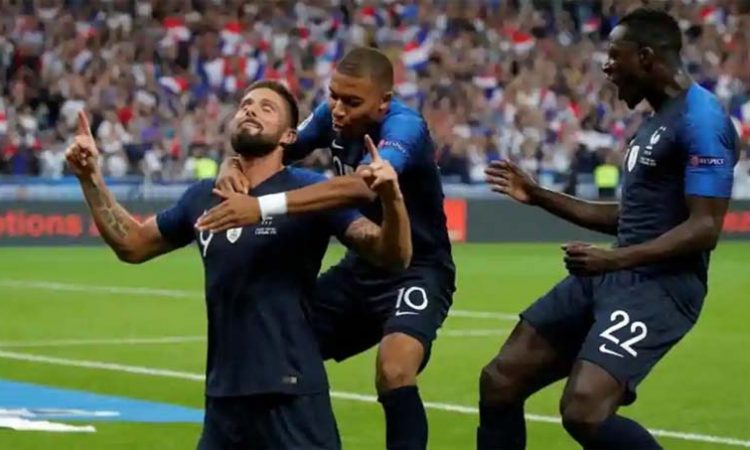 PARIS, September 10: France finally celebrated winning the World Cup with their home fans on Sunday after Kylian Mbappe and Olivier Giroud both scored in a 2-1 win over the Netherlands in Paris.
Giroud swept in the winner from a Benjamin Mendy cross in the 75th minute for his first goal in 11 games in a France shirt, after the Chelsea striker went through the entirety of his country’s triumphant campaign in Russia without scoring.
On their first appearance on home soil since the World Cup, Mbappe had earlier put France ahead in an explosive performance from the 19-year-old, before Ryan Babel briefly restored parity in the second half.
The Stade de France exploded in celebration at Giroud’s winner in a game that had a competitive edge as part of UEFA’s new Nations League.
However, this match on a balmy evening was really just a prelude to World Cup victory celebrations on the pitch in front of almost 80,000 fans at the national stadium after the final whistle.
“The victory was the most important thing, so we can have a great party,” coach Didier Deschamps told television station M6.
“I am really pleased for Olivier. Strikers can have periods like that where they are not as efficient, but he is useful in our build-up play, he scored a lovely goal, and on top of that it gave us the victory.”
The French team and their supporters saw this occasion as the opportunity to make up for the lack of a memorable public celebration in the immediate aftermath of the World Cup triumph in Russia.
The day after beating Croatia 4-2 in the final, Les Bleus paraded hurriedly down the Champs-Elysees Avenue in Paris en route to a reception hosted by President Emmanuel Macron. (AFP)