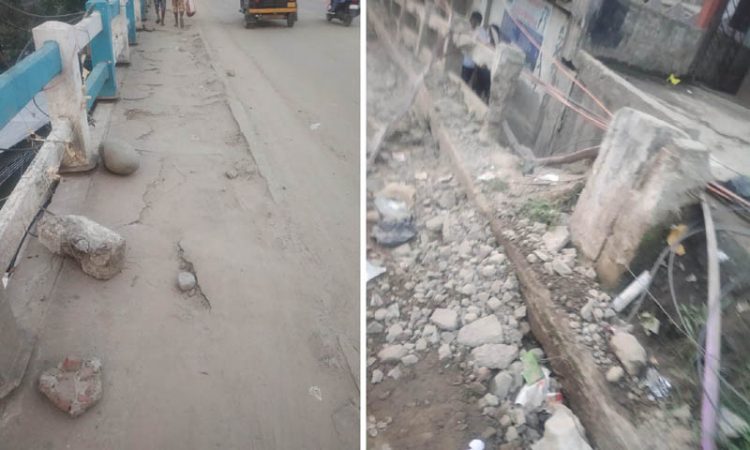 Dimapur, May 20: The Old Overbridge or Dimapur Overbridge that connects Golaghat Road to Burma Camp and the rest of Nagaland as well as Manipur is in a deplorable state with every chance of it collapsing any moment unless the authorities get their priorities right.
The Old Overbridge has been the life line of the State and Manipur since it became operational in January 1973. For the last 46 years, there has been no visible work to maintain the structure (including pillars) of the bridge, except cosmetic works.
Repair works to make the decrepit overbridge look new and beautiful is undertaken at least 2-3 times a year, but no works to strengthen the body of the bridge has been taken in recent memory. It is a sad state of affair that the authorities are prioritizing outward beauty to inner strength of the bridge.
“It may collapse any day. We fear the worse if such eventualities take place,” remarked an elderly shopkeeper who claimed to have been in the area for the last 30 years and has witnessed the beautiful bridge being transformed into a “no man’s bridge”.
Nagaland Page contacted PWD (R&B) office over phone to know the status of the old overbridge but it was futile. The only information forthcoming from officials was that the old overbridge is now undergoing repair works, which is evident to all.
The department appears to be oblivious to the deteriorating condition of the bridge, or even if so is keeping the matter under wraps. And as per all indication, the department seems to be in no rush dismantle the withered bridge and construct a new one.
Talking to Nagaland Page over phone, Er Ajay Kumar of TK Engineering overseeing the supervision and execution of the ongoing repair works made it explicitly clear that the company is undertaking only minor repairing.
When asked on what minor repairing entails, he said the firm is undertaking cleaning and painting of railings, repairing minor cracks on the railings and pavements. “These are only cosmetic works and we are gradually progressing in our work,” he said.
“It is only a minor repairing and not a major repairing work which the company bagged in 2017 but received the Letter of Intent only on 21st March 2018,” he informed. He said 21st September 2019 is the expected date for the completion of the minor repairing but due to delay completion date has been rescheduled to December 2019.
On the reasons for the delay despite receiving the work order in March 2018, he said, “Due to many reasons we are unable to complete the work. We faced many obstructions such as removing utilities such as electric wires, electric and telephone poles, water pipe lines from the structure and more importantly the encroachments by many within the over bridge area, which was a nauseating one”.
He stated that encroachment was the most distressing problem the construction company faced and evicting the encroachers was a major challenge for which the work was delayed. “Many people had constructed shops and residential houses within the proximity of the bridge and for which we could not initiate the work at full pace”.
On the present status of the works he said it is progressing well and was confident of completing the repairing before the deadline.
Nagaland Page again tried to contact PWD (Road & Bridges) officials for further comments but there has been no response so far. (Page News Service)