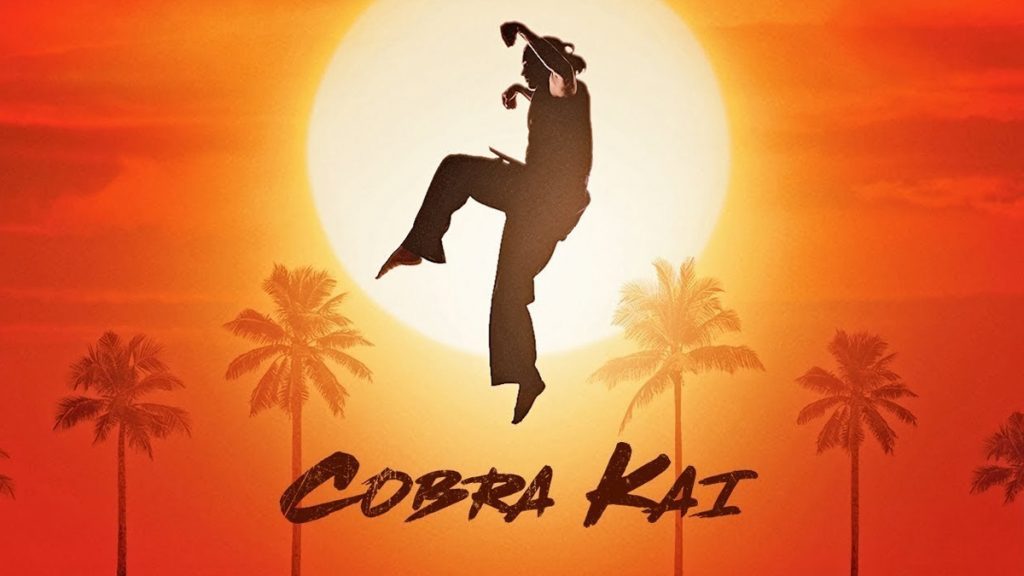 The second season of Cobra Kai opens with an epic fight between Johnny Lawrence and John Kreese. The 2 men, one middle-aged and the other certifiably old, go at each other in an empty dojo whose emblem is an upright snake, to establish who is the alpha ~ if there is an afterlife, Dr Freud must have had goosebumps when this scene was being filmed. It’s hard to take the Lawrence and Kreese fight seriously even though both give it their all. At one point, Lawrence (perhaps inspired by the bottle cap challenge from last year?) unleashes an almighty kick just so he can dislodge a fat cigar from Kreese’s mouth. You’d think there would be easier ways to stop a guy smoking, but no. That cigar lands neatly in a wastepaper basket and starts a small fire. At the end of the fight, when both men are flat on their backs and gasping for breath, a sprinkler bursts forth to extinguish whatever little ego the victor may have wanted to pat.
Cobra Kai is all about the hangover of the past reaching into the present. The original rivalry between the teenaged Lawrence and Daniel LaRusso from iconic The Karate Kid is rinsed and repeated in different settings for Cobra Kai. Much of the show’s appeal lies in seeing how Lawrence, the old bully, evolves into a grouchy, but soft-hearted sensei. The roles of LaRusso and Lawrence being reprised by the same actors (Ralph Macchio and William Zabka), who played these parts in the 1984 film is a masterstroke. With a soundtrack full of ’80s tracks and visual tropes from that period’s cinema ~ Los Angeles somehow looks as sunny and pristine as it did back then ~ Cobra Kai simultaneously pokes fun of the past while milking it for nostalgic appeal.
The show also adds details that help Cobra Kai take a bat to toxic masculinity. The dojos are mixed-gender now, and the show repeatedly underscores just how little there is to be gained from violence. The last fight of the season begins with comic undertones, as 2 girls circle each other, fighting over a boy. It seems to be a reversal of The Karate Kid’s love triangle, but in no time, Cobra Kai taps into 21st-century bloodlust. Soon, violence has spread like wildfire through the high school, and everyone, down to the cutest nerd, is kicking their way down hallways.
In Cobra Kai’s second season, we’ve seen Lawrence emerge out of the cave of the 1980s, and change the way he thinks. The scene has now been set for Season 3, in which we’ll presumably see Lawrence and LaRusso assemble (a la Avengers) against Kreese’s machismo (and hairdo). For streaming platforms such as Netflix, the age of COVID-19 has delivered a flurry of surprise hits. From the kidnap erotica 365 Days to the contemporary ode to arranged marriages that was Indian Matchmaking, and now the second season of Cobra Kai, there seems to be no telling what we’ll turn to for comfort. Yet there is a connection. Despite belonging to starkly different genres, there’s been a strong element of nostalgia to many audience favourites during the lockdown. Frequently, the old ideas and formulae are packaged in modern storytelling. While Indian Matchmaking suggests arranged marriages can adapt to the present, 365 Days has stereotypes (like the bad-boy hero) from the pulpiest paperback romances of the ’80s and ’90s. Cobra Kai doesn’t just reference the past; it revives the ’80s by showing scenes from The Karate Kid films. Contrasting with the contemporary Cobra Kai, the films seem to hark back to a mellower, easier time than the one that Lawrence and LaRusso have to negotiate.
When the future is uncertain, it’s not surprising that we’re looking to the past for comfort. So here’s the wisdom distilled from Lawrence’s experiences in Cobra Kai~ to move forward, you’ve got to learn from the past, change with the times, and chuck your smartphone into the sea.
The views expressed are personal (Courtesy: HT)