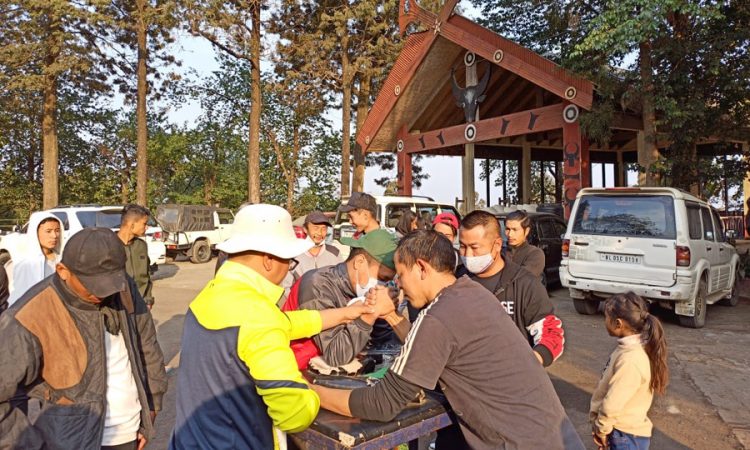 KOHIMA, FEBRUARY 13: In a bid to foster better understanding between the residents of Officers’ Hill Youth Organisation (OHYO), a one day sports meet was organized at The Heritage, Raj Bhavan on February 13.

Speaking on the occasion, Deputy Commissioner Kohima, Thejawelie Gregory Sote said, “In sports, we usually try to win all the time which is also good but sports can also serve a greater purpose of fostering better understanding and promoting peace among the people.”
Stressing on the need for everyone to be aware about the rule of law and follow it wherever one is, the DC also implored on the youth to adopt a life of discipline which he believes will continue to serve the greater purpose in the long run.
Vice-President of OHYO, Imoliba Jamir said that the main motive behind organizing the sports meet was to provide to the residents, especially the youths with a opportunity to know each other better and build a stronger relationship. “I believe it is a good time to strengthen our friendship bond and unite together as one,” he said.
The day’s event witnessed the keen participation of the youth from all the four sectors of the colony in several sports and games.
Aselie from Sector A emerged as the champion in men’s race which was conducted around The Heritage Circuit in three laps. Tsiyi from Sector B was the runner-up.
In a tightly contested men’s arm wrestling match, the champion was Theja and Visanyii solo had to contend with being the runneru-up.
In Carrom Board (Single), Khekiho Swu of Sector C outperformed everyone in the category and claimed the championship in the single category. Chokho Loho was the runner-up.
Participants of Carrom (doubles) delivered a spectacular display of skills and coordination as Avilie & Kezhalezo outmaneuvered their opponents in the finale and claimed their rightful championship. Kulhu & Lonyi were the runner-up.

Sector-B of OHYO were the dream team for the day as they undermined all the other sectors in Tug-of-war. The runners-up in this category was sector C.
Nothing is certain in a Ludo Match, and it sure did surprise every spectator as Menguvito came from behind to claim the first position and leave the second place finish to Seyivonuo.

The main event of the day between Sector B and Sector C, Futsal(men) also witnessed several near misses and hits but when the referee gave the final whistle, Sector B was the winner with the scoreline 5-4
Activities such as marble & spoon race, Sweet Jump, balloon fight, threading the needle and skipping was also organised for the youngsters of OHYO.
(Page News Service)