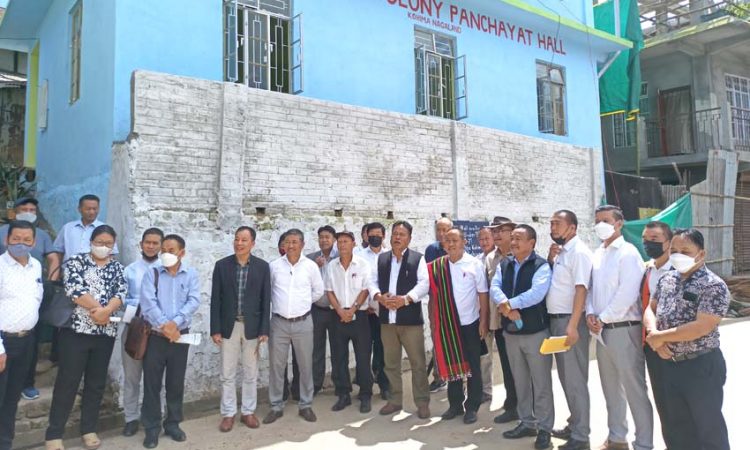 Adding that Officers’ Hill Colony is leading by example as a model colony for other colonies within Kohima, he further encouraged the colony members to keep up the good work at the inauguration.
OHCC Chairman, Khrielakuo Sekhose expressed the gratitude of the colony members to Kohima Village, T. Khel for allotting the land for the construction of the building, the contribution from MLA Keneizhakho Nakhro and former Governor of Nagaland, P B Acharya for being the first the contribute toward the realization of a much need council office in the colony.
Expressing happiness on the completion of the project, he said that the moment on Saturday will remind the people of where they have come from and also added that the work also shows how far a colony can go in terms of progress if it is united with the idea of community building.
Convenor building committee, Vikheto Sema informed that work toward construction of the building commenced in August 2020 and the total area on which the building has been constructed is 1846 square feet and the total expenditure was Rs.18,37,000.
He further added that within the two-storied building, one room was reserved for the Government Middle School adjacent to the council building, a room for the youth organisation, a colony council meeting hall with a seating capacity of 70 people, along with a community borewell and a public toilet. Sema also reiterated the contributions made by the two former Governors of Nagaland, P B Acharya and R N Ravi for their contribution toward the completion of the building.
President, Officers’ Hill Youth Organization, Kezhalezo Solo also gave a brief highlight behind the community borewell that was also inaugurated on Saturday.
He said the problem of scarcity of drinking water in Kohima is an issue plaguing the majority of the population not only in the colony but throughout Kohima.
He said that the problem needed to be addressed on a priority basis with the realization that there has been a shift in the mindset of each citizen not to only rely on the Government to provide for the needs of the community. The residents of the colony decided to install a borewell that would be placed in the heart of the community building compound as a sign of collective ownership of the community, he added.

Construction of the community borewell began on March 1, 2020, and people were blessed to have struck water on the first day, Solo shared. He further informed that the community borewell is fitted with four outlets in order to distribute the water equally for the four sectors of the colony namely Sector A, B, C and D.
Solo also stated that the success story behind the community’s borewell would not have been possible without the patronage of MLA Keneizhakho Nakhro, who financed the project.
(Page News Service)